Plenty to see at Pier

Below is my “Big Day Out” column from the Saturday, June 8, 2013, Swansea edition of the South Wales Evening Post. 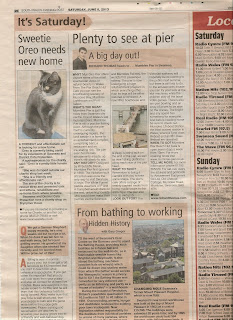 Plenty to see at Pier
A big day out!
RICHARD THOMAS heads to Mumbles Pier in Swansea.
WHY? Mumbles Pier offers visitors some of the most spectacular views of natural beauty in Wales. From The Pier Beach Hut Cafe you can see the breathtaking scenery of Mumbles Bay, Mumbles Lighthouse and Port Talbot.
WHAT’S THE BUZZ? Mumbles Pier is just five miles from Swansea City Centre. One of Wales’ last Victorian piers, Mumbles Pier is still a popular fishing point. Although the Pier itself is currently undergoing repairs, the land beside The Pier is an entertainment complex comprising bars, a restaurant, and ice-skating rink. The Pier even has its own amusements arcade, so there’s still plenty to see.
ANY HISTORY? Designed by W. Sutcliffe Marsh, Mumbles Pier first opened in 1898. The Victorian built attraction was once the only way to visit Swansea in style. The White Funnel paddle steamers of P and A Campbell would dock on the end unloading tourists who would then make their journey via the Swansea and Mumbles Railway, the world’s first passenger railway. The pier is now undergoing a huge refurbishment program in which everything other than its legs will be either restored or renewed. A new RNLI boathouse and slipway is being built on the end of the pier as well as new fishing platforms along each side of the pier head.
WHAT TO TAKE? Remember to bring a camera with you to take some snaps. The pier's cafe offer a range of freshly-cooked meals from home made soups to fish and chips. The Pier also has its own pub.
LOOK OUT FOR? The Victorian walkway will hopefully be re-opening to the public next summer, but there is still lots to do. In the amusements arcade you can try your luck at the slot machines while the children play all the latest video games. There’s also ten pen bowling and an array of prizes to be won on the cranes. The bright and airy space has something for everyone. And before heading home be sure to check out Mumbles Lifeboat Station, the third busiest station in Wales, where a Tyne class lifeboat and a IB1 class lifeboat are operated.
WHEN TO GO? Mumbles Pier Beach Hut Cafe is open seven days a week from 10am. For more opening times visit www.mumbles-pier.co.uk.
TELL ME MORE: For more information phone 01792 365220. For sat-nav users the address and postcode is: Amusement Equipment Co Ltd, Old Lifeboat Cottage, Mumbles Road, Mumbles, Swansea, SA3 4EN.
Visit www.richardthomas.com.
Posted by RichardThomasBlog.com at 14:22 No comments: