Tree-sy does it at park

Below is my “Big Day Out” column from the Saturday, February 23, 2013, Swansea edition of the South Wales Evening Post 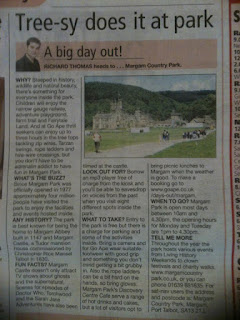 Tree-sy does it at park
A big day out!
RICHARD THOMAS heads to Margam Country Park.
WHY? Steeped in history, wildlife and natural beauty, there’s something for everyone inside the park. Located in Port Talbot, along the eastern rim of Swansea Bay, the 850 acre estate boasts a magnificent 18th century orangery, an impressive and picturesque Tudor-Gothic style Victorian mansion house, a 12th century chapter house, ornamental gardens and one of the best deer herds in Wales. Children will enjoy the narrow gauge railway, adventure playground, farm trail and Fairytale Land. And at Go Ape thrill seekers can enjoy up to three hours in the tree tops tackling zip wires, Tarzan swings, rope ladders and hire-wire crossings, but you don't have to be adrenalin addict to have fun in Margam Park.
WHAT’S THE BUZZ? Since Margam Park was officially opened in 1977 approximately four million people have visited the park to enjoy the facilities and events hosted inside.
ANY HISTORY? The park is best known for being the home to Margam Abbey built in 1147 and Margam Castle, a Tudor mansion house commissioned by Christopher Rice Mansel Talbot in 1830. Although a relatively modern building, the castle was built on the site of an Iron Age hill fort, and during the ten years it took to complete the castle there were several deaths of masons involved in the contraction work. The Gothic building’s troubled beginning combined with the 4000 year history of the site has attracted many paranormal investigators to the castle.
LOOK OUT FOR? Borrow an mp3 player free of charge from the kiosk and you'll be able to eavesdrop on voices from the past when you visit eight different spots inside the park. Written by David Hughes and recorded by local actors, these echoes from the past offer a fascinating insight into the lives of people who have worked, visited or lived on the estate over the centuries.
FUN FACTS? Margam Castle doesn’t only attract TV shows about ghosts and the supernatural, scenes for episodes of Doctor Who, Torchwood and the Sarah Jane Adventures have also been filmed at the castle. Last July the production team for the new drama series the Da Vinci's Demons written by David S. Goyer, who also penned the scripts for Batman Begins and Blade, were busy setting up camp at the castle.
WHAT TO TAKE? Entry to the park is free but there is a charge for parking and some of the activities inside. Bring a camera and for Go Ape wear suitable footwear with good grip and something you don't mind getting a bit grubby in. Also the rope ladders can be a bit hard on the hands, so bring gloves. Margam Park's Discovery Centre Cafe serve a range of hot drinks and cakes, but a lot of visitors opt to bring picnic lunches to Margam when the weather is good. To make a booking go to www.goape.co.uk/days-out/margam.
WHEN TO GO? Margam Park is open most days between 10am and 4.30pm, the opening hours for Monday and Tuesday are 1pm to 4.30pm.
TELL ME MORE: Throughout the year the park hosts various events from Living History Weekends to clown festivals and charity walks. Information about these and other events and attractions at Margam Park can be found at www.margamcountrypark.co.uk, or you can phone 01639 881635. For sat-nav users the full address and postcode is: Margam Country Park, Margam, Port Talbot, SA13 2TJ.
Visit www.richardthomas.eu.
Posted by RichardThomasBlog.com at 01:50 No comments: