Below is my “Days Out” column from The Weekend supplement in the Saturday, November 23, 2013, issue of the South Wales Evening Post. 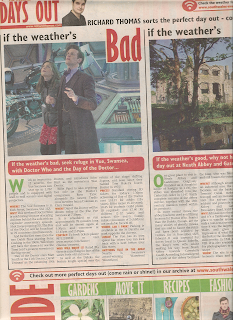 
Days Out
With Richard Thomas
...IF THE WEATHER'S BAD
With an impressive 12 screens, the Vue Swansea can seat up to 1,762 people and is equipped with wall-to-wall screens and digital projectors, making it an ideal choice for viewing the best blockbusters in 3D!
WHERE? The Vue Swansea is located in the center of Swansea. For sat-nav users the address and postcode is: Vue Cinema Swansea, York Street, Swansea SA1 3LZ.
WHY? This weekend Doctor Who is celebrating fifty years of scaring children behind sofa with an explosive 50th anniversary episode. Shot in eye popping 3D, The Day of the Doctor will be broadcast in 76 countries simultaneously. And for the first time since the two Dalek films starring Peter Cushing in the 1960s, Whovians will have the chance to see the Time Lord’s greatest enemies on the big screen! Day of the Doctor stars Matt Smith as the Eleventh Doctor, David Tennant as the returning Tenth Doctor, and introduces John Hurt as the mysterious War Doctor. Billie Piper is also reprising her role as the Doctor’s companion Rose Tyler, alongside the newest TARDIS crew member Jenna Coleman as Clara Oswald.
WHEN? Day of the Doctor will be shown today (23 November) at the The Vue Swansea at 7.30pm. It is scheduled to run approximately 76minuets long and will be shown again at 9.30pm and tomorrow (24 November) at 12.45pm and 2.45pm.
CONTACT? To book tickets phone 08712240240 or visitwww.myvue.com/home/cinema/swansea.
WHO WILL ENJOY IT? Rated PG, there is something for fans of the series both old and new. As well as the Daleks, the feature length special sees the return of the shape shifting Zygons, not seen since they battled Tom Baker’s Fourth Doctor in 1975!
PRICES? Standard seating 3D tickets for the Saturday 23 November 7.30pm screening of Day of the Doctor cost £10.15 for adults (19+ years); £8.00 for teens (13-18 years); £8.45 for students (valid photo ID required); and £7.60 for children (2-12 years) and seniors (60+ years). Family tickets (minimum of 2 children) are available for £30.40.
LUNCH? The Vue has its own speed bar where you can kick back with a beer before your film starts.
WHERE CAN I PARK? Parking is available in the St. David’s car park opposite the cinema.
ANYTHING ELSE IN THE AREA? Nearby is Swansea’s award-winning Waterfront Winterland.With two ice rinks, a festive funfair, stalls, hot food and the Sky Ride, it’s fantastic fun for the festive season. Visit www.swanseachristmas.com.
...IF THE WEATHER'S GOOD
From spectacular natural scenery to stunning monument settings, the historical and archaeological landscapes of South Wales have lots to offer. One great place to visit is Neath Abbey and Gatehouse. Originally founded as a daughter house of Savigny in 1130, the abbey was absorbed into the Cistercian order in 1147. Fairly complete remains of the abbey survive, together with the 16th century mansion raised within its precincts.
In more recent times the Abbey has been used as a filming location for Doctor Who. Scarier than the Daleks, though, are the many stories of ghostly monks that are said to haunt the ruins and have been reported by visitors. On 16 November 1326 Edward II was captured by forces loyal to Queen Isabella, the king's own wife, whilst making his way from Neath Abbey towards Caerphilly Castle. According to local legend a monk at the abbey betrayed the king, who was later killed, and still haunts the ruins today.
WHERE? The abbey is located in Neath Port Talbot. Although situated near an industrial area, the Abbey's location, on the banks of the Tennant Canal, makes it a tranquil and memorable site to visit. For sat-nav users the address and postcode is: Neath Abbey and Gatehouse, Monastery Road, SA10 7DW.
WHY? Admission to the site is free and it’s a fascinating and quiet place to wander around. While only a ruin remains today, at one time it was the largest abbey in Wales and gives a good impression of what things were like before the dissolution of the monasteries in 1536 by Henry VIII. It is also a wonderful spot for photographers to take some snaps.
WHEN? The site is open daily between 10am and 4pm. Last admissions are 30-minutes before closing.
CONTACT: For more information call 44 292 050 00200.
HOW LONG WILL THIS TAKE? There is no charge to see the Abbey and Gatehouse, so you can spend as much time as you like taking in the surroundings.
WHO WILL ENJOY IT? Whether you’re a fun seeking family or a couple looking for a romantic setting for a picnic, all ages will enjoy this beautiful historical site.
LUNCH? The Abbey is a great place for a picnic, so pack one.
ANYTHING ELSE IN THE AREA? Located in Port Talbot, along the eastern rim of Swansea Bay, Margam Country Park boasts a magnificent 18th century orangery, picturesque Tudor-Gothic style Victorian mansion house, a 12th century chapter house, ornamental gardens and one of the best deer herds in Wales. Children will enjoy the narrow gauge railway, adventure playground, farm trail and Fairytale Land. Visit www.margamcountrypark.co.uk.
Posted by RichardThomasBlog.com at 12:22