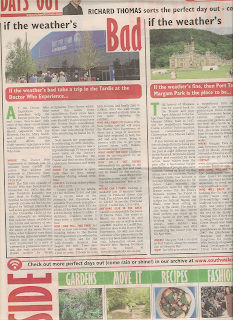 IF THE WEATHER'S BAD…
Take a trip in the TARDIS at the Doctor Who Experience.
At the Doctor Who Experience time travellers help the Doctor pilot the TARDIS and come face-to-face with some of the show's most iconic villains. Featuring exclusive filmed sequences with the Eleventh Doctor, Mat Smith, and packed with amazing special effects, this multi-sensory experience is fun for everyone and not just Doctor Who fans.
WHERE? The Doctor Who Experience is located just 10-minutes from Cardiff city centre. The address and postcode is:  Discovery Quay, Porth Teigr, Butetown, Cardiff, CF10 4GA.
WHY? The first ever episode of Doctor Who was broadcast on November 23, 1963, the day after President Kennedy was shot dead in Dallas, Texas. Entitled "An Unearthly Child" the episode introduced the Doctor, played by William Hartnell, as well as his granddaughter Susan - the "Unearthly Child" of the title. Although, an intriguing first episode which established the TARDIS and mystery of who this time traveller was - hence the name of the series Doctor Who, what followed were three very boring episodes where the Doctor and his companions were imprisoned by a tribe of cavemen in prehistoric times. It was the next adventure "The Daleks" written by Welsh scriptwriter Terry Naton which saved the series from cancellation. Forty years later another Welshman, Swansea's own Russell T. Davies would save the Doctor from cancellation again, moving the series to Wales and reinventing Doctor Who after being on hiatus for 15 years.
Next month the programme is celebrating its 50th birthday, so it is the perfect time to take a trip back through TV history and meet some of the Doctor's greatest foes, including the Daleks and their creator Davros, Cybermen, Sontarans and many others.
WHEN? The exhibition is open daily 9am to 5pm, except Tuesdays during school term time.
CONTACT: To book tickets phone 084 4801 2279.
Tickets cost £15 for adults; £11 for children (5-16) and £46 for a family ticket at the entrance, but discounts are available if you book your place. Advanced tickets cost £13 for adults, £9 for children (5-16) and £38 for family tickets (2 adults, 2 children). Children under 5 must have a ticket but this is free!
HOW LONG WILL THIS TAKE? Set aside at least 2-hours. When booking tickets to the Doctor Who Experience you will need to select a time slot for the walk-through element that begins the tour. Time slots available are: 10am to 11am, 11am to 12noon, 12noon to 1pm, 1pm to 2pm, and finally 2pm to 3.30pm. After the walk-trough you can spend as much time as you want exploring the exhibits.
WHO WILL ENJOY IT? Doctor Who fans young and old will enjoy the Doctor Who Experience, as there are a range of monsters that have appeared in both the old and new series. Bring a camera with you to get your picture taken with Daleks, Sontarans and Cybermen.
WHAT ABOUT THE KIDS? Children must be accompanied by an adult at all times.
HOW DO I GET THERE? Information on getting to the exhibition by car, bus and train can be found on the website. Visit:  www.doctorwhoexperience.com and click on “useful information” link at the top.
WHERE CAN I PARK? Parking is available just 10-minuets walk away at Pierhead Street Car Park. The address and postcode is: Cardiff Waterside, Pierhead Street, Cardiff Bay, CF10 4PH.
ANYTHING ELSE IN THE AREA? Cardiff is indisputably the home of Doctor Who. The series is filmed on location in and around the city as well as at the new BBC Studios in Cardiff Bay, just next door to the Doctor Who Experience.  So why not check out some of the places where the series has been filmed after your visit. Information about past Doctor Who filming locations can be found atwww.doctorwholocations.net.
Posted by RichardThomasBlog.com at 15:03