Below is my “Days Out” column from The Weekend supplement in the Saturday, September 14, 2013,
issue of the South Wales Evening Post. 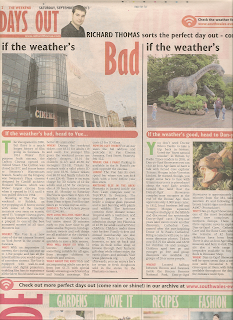 
Days Out!
With Richard Thomas
...IF THE WEATHER'S GOOD
You don’t need Doctor Who's TARDIS to take a trip back in history. Voted the “finest natural wonder” in Britain by Radio Times readers in 2005, at Dan-yr-Ogof Showcaves you can visit an Iron Age farm or have a talk with famed cave explorer Tommy Morgan in his Victorian kitchen. Be warned, though, you might come face to face with tyrannosaurus rex or pterodactyl along the way! Early settlers farmed the land that the Dan-yr-Ogof Showcaves complex now occupies at the end of the Bronze Age, then approximately 3,000 years later, in 1912, local brothers Jeff and Tommy Morgan squeezed though a small gap in the hillside and discovered the spectacular Dan-yr-Ogof cave. Forty-one years later cavers made another discovery, Cathedral Cave, named after the awe-inspiring Dome of St Paul’s Cathedral. Bring a camera with you to take some dinosaur photos. Tickets cost £13.75 for adults and £8.50 for children 16 and younger. Children aged 2 years old go and younger go free and group discounts are available for groups of 20 or more people.
WHERE? Located halfway between Brecon and Swansea inside the Brecon Beacons National Park, Dan-yr-Ogof Showcaves is approximately 25minuets from the M4, taking junction 45 and following the brown tourist signs north on the A4067 (Pontardawe).
WHY? Dan-yr-Ogof Showcaves is one of the most breathtaking show cave complexes in northern Europe. There are three separate caves to explore: Dan-yr-Ogof cave, Cathedral Cave and the Bone Cave, where the remains of 42 human skeletons have been found. There is also an Iron Age village, museum and farm to visit. There are also a wide range of keepsakes available to buy in Rock & Dinosaur Shop.
WHEN? Dan-yr-Ogof Showcaves will be open seven days a week now until Sunday 3 November 2013. The caves open at 10am, with tickets available throughout the day at the entrance until 3pm.
CONTACT? Phone 01639730 284 or visit www.showcaves.co.uk.
HOW LONG WILL THIS TAKE? You will want to spend the whole day at the showcaves.
WHO WILL ENJOY IT? All ages are welcome inside Brecon Beacons National Park. Kids will enjoy will enjoy exploring the Dinosaur Park, one of the largest parks of its type in the world, with nearly 200 life-sized replicas of T. rexes, pterodactyls, brontosaurus and other prehistoric beasts that ruled the Earth 65 million years before mankind. All the dinosaur models are outdoors, though, so don’t forget to bring a raincoat or umbrella with you just encase the weather changes, and wear suitable footwear for exploring the caves.
WHAT ABOUT THE KIDS? There is an adventure playground for 6-10 year olds to play in.
HOW TO GET THERE? For sat-nav users the postcode is SA9 1GJ.
LUNCH? The coffee shop has a range of food and drinks, hot or cold, where you can relax and have a coffee while looking out on the breathtaking view of the Brecon Beacons.
WHERE CAN I PARK? There is an onsite car park.
ANYTHING ELSE IN THE AREA? There is lots more to explore inside the Brecon Beacons National Park to see and do. Visit www.breconbeacons.org.

...IF THE WEATHER'S BAD
The Vue opened in 2006, but there is a much longer history of film going in Swansea. In 1914 Wales’ first purpose built cinema, the Carlton Cinema de Luxe, opened on Oxford Street. The Carlton was closed in 1977, and is now home to Swansea's Waterstones branch. Nearby on the Kingway was Swansea's Plaza cinema designed by Cardiff architect Howard Williams, which was Wales' largest cinema from when it opened in 1931 until it was pulled down in 1964.
Showing at The Vue this weekend is Riddick, an eye-popping sci-fi horror movie with some of the nastiest monsters ever seen on screen, rated 15. Younger cinema goers will enjoy Monsters University, a prequel to one of the best animated movies of all time, Monsters Inc.
WHERE? The Vue is a new state-of-the-art cinema located on York Street in the centre of Swansea.
WHY? With an impressive 12 screens, the cinema can seat up to 1,762 people and has all the latest facilities you would expect of a modern cinema. The Vue is equipped with wall-to-wall screens and digital projectors, enabling film fans to experience all the latest blockbusters in ever better 3D animation!
WHEN? During the weekend tickets cost £8.15 for adults (19 and over). For younger film goers the weekend prices are slightly cheaper, £6.10 for children (2-12) and £6.50 for teenagers (13-18). Tickets for students with a valid photo ID only cost £6.95. Senior tickets cost £6.10 and Family tickets for 4 cost £24.40. There is an extra charge for 3D tickets of £2 for adults and £1.50 for everyone else. A 3D family ticket costs an extra £6. Monday to Saturday The Vue is open 9am to 5pm. On Sundays the cinema is open from 10am to 4pm. For film start times go to www.myvue.com.
CONTACT? To book tickets phone 08712240240.
HOW LONG WILL THIS TAKE? Most films run for about two hours, but arrive about 20minuets early so you have time to get some snacks. Popcorn, hot dogs, nachos, sweets and soft drinks are all available at the cinema’s snacks counter. Combos are available to save a little money.
WHO WILL ENJOY IT? With 12 screens there's always something suitable for all ages, from younger children to students and seniors.
WHAT ABOUT THE KIDS? Kids and accompanying adults can get in from just £1.75 with special family screenings each Saturday and Sunday mornings. This costs £3 for 3D films.
HOW DO I GET THERE? For sat-nav users the full address and postcode is: Vue Cinema Swansea, York Street, Swansea, SA1 3LZ.
LUNCH? The Vue has its own speed bar where you can kick back with a beer before your film starts.
WHERE CAN I PARK? Parking is available in the St. David’s car park opposite the cinema.
ANYTHING ELSE IN THE AREA? Plantasia is located inside the Parc Tawe complex near to Toys'R'Us in Swansea. The tropical paradise is housed inside a unique glass pyramid and is just bursting with plants and wildlife. The hothouse contains three climate zones: Tropical with a rainforest, Arid and Humid. There is an admission charge into Plantasia of £3.95 for adults and £2.95 for children. Children under 3 visit for free. Family tickets and annual membership are also available. There is no charge, however, to just sit back and relax in their coffee shop or browse through their fantastic gift shop while others enjoy the exotic plants and animals. Visit www.plantasia.org. And afterwards, you can enjoy a Joe’s ice cream or fresh donates sold in the stores by the Plantasia entrance.
Posted by RichardThomasBlog.com at 15:26