The Chocolate Factory and Mumbles Pier

Below is my “Days Out” column from The Weekend supplement in the Saturday, August 24, 2013, issue of the South Wales Evening Post. 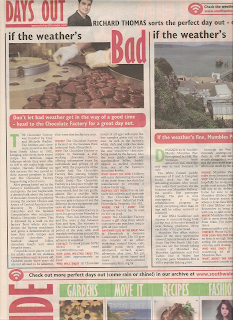 
The Chocolate Factory was founded by Tony and Michelle Wadley. The brother and sister team moved to the UK from South Africa in 1992, bringing with them their secret recipe for delicious sugar lollipops which they were able to sell to the major high street retailer, Harrods. Building on this success, the two moved to their current premises in 1999 and The Chocolate Factory began doing school tours.


After getting kitted up in the factory’s fashionable hairnets and aprons, the tour begins with a detailed talk about the history of chocolate, from its popularity among the ancient Olmecs and Aztecs of Central America to its discovery by Christopher Columbus and the Spanish Conquistador who conquered Mexico, Hernando Cortes. This is followed by a walk on the factory floor where you are shown the factory machinery and given a demonstration of how they melt, temper and re-mould chocolate into football shaped lollies, chocolate hearts and other bespoke items.


For public tours places cost £8 for adults and £6 for children between 3 and 16 years old. Children under 3 years old are not allowed to be admitted. Visit www.thechocfactory.com.


WHERE? The Chocolate Factory is located inside Swansea West Industrial Park, Fforestfach, Swansea.


WHEN? The Chocolate Factory is open for group tours Monday to Friday. They run between four and five tours a day between 9am and 4pm. The summer is The Chocolate Factory’s busiest period of the year, with staff regularly welcoming around 200 customers a day, so booking in advance is essential.


HOW LONG WILL THIS TAKE? The tour lasts approximately an hour.


WHO WILL ENJOY IT? Chocolate lovers of all ages will enjoy the free samples given out on the tour. As well as the factory’s white, dark and milk chocolate varieties, you also get to taste the new strawberry chocolate being tested by the factory. Also the tour guide hands out marshmallow lollies, freshly dipped in melted chocolate from one of the factory’s chocolate kettles.


WHAT ABOUT THE KIDS? Children will enjoy discovering the tricks of the trade from chocolate bar manufacture to creating a hollow Easter egg.


HOW TO GET THERE? For sat nav users the address and postcode is: The Chocolate Factory, Swansea West Industrial Park, Fforestfach, Swansea, SA5 4DL.


LUNCH? The Chocolate Factory houses a chocolate gift shop from which customers can purchase its unique products. These make for great gifts all year round


WHERE CAN I PARK? The Chocolate Factory has its own on site car park.


ANYTHING ELSE IN THE AREA? Also in Fforestfach is Swansea Community Farm run by local people for the benefit of the wider community. Activities held on the 3.5 acre site are run in a way that minimises any negative impact on the environment whilst helping to enhance local biodiversity and encourage nature conservation. The 3.5 acre site consists of an office, workshop, animal house, cafe, wildlife pond, duck pond, allotments, orchard, apiary, paddocks, adventure play area, fire pit, compost demonstration area, raised beds, and picnic space. The farm depends on membership and donations. A year membership only costs £5. Visit www.swanseacommunityfarm.org.uk.


Designed by W. Sutcliffe Marsh, Mumbles Pier first opened in 1898. The Victorian built attraction was once the only way to visit Swansea in style. The White Funnel paddle steamers of P and A Campbell would dock on the end unloading tourists who would then make their journey via the Swansea and Mumbles Railway, the world’s first passenger railway. The pier is now undergoing a huge refurbishment program in which everything other than its legs will be either restored or renewed. A new RNLI boathouse and slipway is being built on the end of the pier as well as new fishing platforms along each side of the pier head.

Mumbles Pier offers visitors some of the most spectacular views of natural beauty in Wales. From The Pier Beach Hut Cafe you can see the breath taking scenery of Mumbles Bay, Mumbles Lighthouse and Port Talbot. One of Wales’ last Victorian piers, Mumbles Pier is still a popular fishing point. Although the Pier itself is currently undergoing repairs, the land beside The Pier is an entertainment complex comprising bars, a restaurant, and ice-skating rink. The Pier even has its own amusements arcade, so there’s still plenty to see.


WHY? The Victorian walkway will hopefully be re-opening to the public next summer, but there is still lots to do. Before heading home be sure to check out Mumbles Lifeboat Station, the third busiest station in Wales, where a Tyne class lifeboat and a IB1 class lifeboat are operated. Remember to bring a camera with you to take some snaps.

WHEN? Mumbles Pier Beach Hut Cafe is open seven days a week from 10am. For more opening times visit www.mumbles-pier.co.uk.

HOW LONG WILL THIS TAKE? About an hour is enough time to spend seeing the attractions, but you can stay until closing.

WHO WILL ENJOY IT? There is something for all ages at Mumbles Pier.

WHAT ABOUT THE KIDS? In the amusements arcade you can try your luck at the slot machines while the children play all the latest video games. There is also ten pen bowling and an array of prizes to be won on the cranes. The bright and airy space has something for everyone.

HOW DO I GET THERE? For sat-nav users the address and postcode is: Amusement Equipment Co Ltd, Old Lifeboat Cottage, Mumbles Road, Mumbles, Swansea, SA3 4EN.

LUNCH? The pier's café offer a range of freshly-cooked meals from homemade soups to fish and chips. The Pier also has its own pub. After lunch head to Verdi’s just a short walk away for an ice cream.

WHERE CAN I PARK? There is large car park right next to Mumbles Pier.

ANYTHING ELSE IN THE AREA? There is lots more to see in Mumbles. Oystermouth Castle was built around 1100 by William de Londres and later rebuilt in the 13th century by the infamous de Breos family, after being burnt down by the Welsh twice. There is a small charge of £2.50 for adults and £1.50 for children over 5 for admission. Family tickets for four people are available for £6.50 and children under five visit for free. Remember to bring cash with you as there are no credit/debit card facilities on the castle site. Also wear suitable footwear for the uneven terrain. Visit www.oystermouthcastle.wordpress.com.
Posted by Unknown at 14:28