Below is my “Days Out” column from The Weekend supplement in the Saturday, August 17, 2013, issue of the South Wales Evening Post. 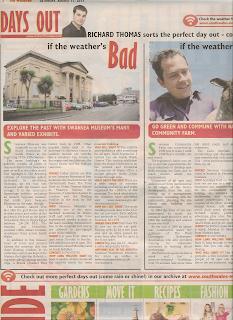 Swansea Museum was originally set up by the Royal Institution of South Wales, a local group who wanted to investigate all aspects of history, the arts and science at the beginning of the 19th century. Described by the Swansea poet Dylan Thomas as “a museum that belongs in a museum”, the impressive stone building was completed in 1841 in the grand neo-classical style, and is the oldest museum in Wales.
The main building’s six galleries contain all kinds of unusual objects from Swansea’s past as well as the wider world. One highlight is The Amazing Cabinet of Curiosities gallery dedicated to everything Victorian, an era that was obsessed with the bizarre and strange. It is the museums Egyptology exhibits including an Ancient Egyptian mummy that really puts Swansea Museum on the map, though.
The mummy, named Tem Hor after the god Horus, was a clothier priest and scribe of the god Atum. He lived on the banks of the River Nile in Upper Egypt between 250-200 BCE. The remains and beautifully restored coffin attract mummy worshipers from across South Wales.
In addition to this treasure trove of local and ancient history the museum also has three floating exhibits in its collections which are kept at the Marina: the lightship Helwick; a tug boat called Canning; and the Olga, a Bristol Channel Pilot Cutter built in 1909. Other popular items kept at the museum’s Collections Centre in Landore include old vehicles like a travellers’ van, lorries, a fire engine and two lifeboats, the Naomi Beatty and the William Gammon.
WHERE? Today visitors are able to see Swansea Museum at four locations: the main museum on Oystermouth Road, The Tramshed on Dylan Thomas Square in Swansea Marina, the museum’s Collections Centre in Landore and the floating exhibits in the dock by The Tramshed.
WHY? Swansea Museum is allegedly one of the most haunted locations in Wales. Staff and visitors alike have experienced spooky activity in the main building. According to one member of staff a mysterious “hooded figure” has been seen on several occasions on the stairs and strange “tapping”, “cold spots” and even “whistling” have also been reported. Admission is free at the museum but you’re not allowed to photograph some of the exhibits. A wide variety of keepsakes including handmade Welsh pottery and glassware, Egyptian memorabilia and Victorian jewellery are all for sale in the Museum Shop.

WHEN? Swansea Museum is open from 10am to 5pm every Tuesday to Sunday. Last admissions are at 4pm. The museum is closed Mondays and bank holidays.

HOW LONG WILL THIS TAKE? An hour is plenty of time to see all the exhibits inside the main museum building.

WHO WILL ENJOY IT? The exhibits and exhibitions offer something for all ages. Until September 1 visitors can see Inside Welsh Homes. This touring exhibition from the Royal Commission on the Ancient and Historical Monuments of Wales offers a unique glimpse inside Welsh homes through time. The exhibition showcases archival images of Welsh homes ranging from the humblest cottages and urban terraces to the grandest of country houses. A selection of the museum's furniture and domestic collections also helps to bring these fascinating images to life.

WHAT ABOUT THE KIDS? There are a wide range of activities including workshops and crafts organised for children at the museum. To check what events the museum have scheduled visit www.swansea.gov.uk/swanseamuseum.

HOW TO GET THERE? The main building is next door to the LC2. For sat nav users their address and postcode is: Victoria Road, Swansea, SA1 1SN.

LUNCH? Food and drink are available next door in the LC Coffee Shop in the LC main reception. There is also the Poolside Bistro on the LC ground floor which offers spectator views of the waterpark and a wide menu of home-cooked family meals.

WHERE CAN I PARK: Next door the LC has an on site car park. Parking costs £2 for a two hour stay and an extra pound for every hour after that for up to a five hour ticket.

ANYTHING ELSE IN THE AREA? Just down the road is the National Waterfront Museum which houses more than 100 historical artefacts from Wales’ industrial past. Formerly the site of the Swansea Industrial & Maritime Museum, the new National Waterfront Museum was opened in October 2005. The museum building itself is a synthesis of contemporary architecture and Welsh history. The building eloquently combining a Grade II listed former dockside warehouse built in 1902 with a 21st century glass and slate structure, designed exactly a century later by Stirling Prize-winning architects Wilkinson Eyre. Admission is free but you might want to purchase some keepsakes in the museum’s gift shop, where the money you spend is gifted back to the museum. Visitors wishing to take photographs will be required to complete a Declaration Form available from the Information Desk, but this doesn't take long, so bring a camera with you. To find out more about exhibits etc. you can visit the National Waterfront Museum website at www.museumwales.ac.uk/en/swansea.

...IF THE WEATHER'S GOOD

Swansea Community Farm was conceived in 1992 but it wasn’t until 1998 that a suitable site was found for the city farm. The registered charity was setup to provide opportunities for local volunteers to develop new skills running the farm and to teach visitors about the environment. Volunteers of all ages and abilities have been instrumental in all stages of the farm’s development from the start: setting up a management committee, consulting with the community, planning the site layout and building site structures. In 2004 the front of site was landscaped to make the entrance more attractive, and in 2006 the workshop and animal house was built. The arrival of the first animals to the farm also brought a new interest from adults and children wanting to work with animals in a farm setting. Soon after a raised bed garden was constructed to provide opportunities for volunteers with mobility constraints to participate in farm activities. By the end of 2006 an apiary was constructed under the guidance of The West Glamorgan Beekeepers Association who also provided training for volunteers interested in learning about beekeeping. The farm now opens six days a week and has 4 purpose-designed buildings, over 50 animals and more than 500 child, youth and adult volunteers.

The farm depends on membership and donations. A year membership only costs £5. Visitwww.swanseacommunityfarm.org.uk.


WHERE? Swansea Community Farm is located in Fforestfach, Swansea.

WHY? Swansea Community Farm is a community-led farm run by local people for the benefit of the wider community. Activities held on the 3.5 acre site are run in a way that minimises any negative impact on the environment whilst helping to enhance local biodiversity and encourage nature conservation. The 3.5 acre site consists of an office, workshop, animal house, cafe, wildlife pond, duck pond, allotments, orchard, apiary, paddocks, adventure play area, fire pit, compost demonstration area, raised beds, and picnic space.

WHEN? The Farm is open six days a week: Monday to Saturday from 10am to 4pm.

HOW LONG WILL THIS TAKE? An hour is long enough to see the farm, but you can stay until closing.

WHO WILL ENJOY IT? The farm provides a fun location where people of all ages can learn about the environment, organic gardening and animal care.

WHAT ABOUT THE KIDS? There are over 50 different animals to see, including sheep, pigs, chickens, rabbits and ducks.

HOW DO I GET THERE? For sat nav usesrs the address and postcode is: 2 Pontarddulais Road, Fforestfach, Swansea, SA5 4BA.

LUNCH? The Farm’s Community Café serves a range of mouth-watering dishes using fresh local produce when available. Prices range from £3.00 for soup of the day to chicken or veggie curry for £5.95.

WHERE CAN I PARK? The Farm has its own car park.

ANYTHING ELSE IN THE AREA? The Chocolate Factory is unique in Swansea: a real, working chocolate factory offering informative tours for individuals and groups of all ages fter getting kitted up in the factory’s fashionable hairnets and aprons, the tour begins with a detailed talk about the history of chocolate, from its popularity among the ancient Olmecs and Aztecs of Central America to its discovery by Christopher Columbus and the Spanish Conquistador who conquered Mexico, Hernando Cortes. This is followed by a walk on the factory floor where you are shown the factory machinery and given a demonstration of how they melt, temper and re-mould chocolate into football shaped lollies, chocolate hearts and other bespoke items. The Chocolate Factory is open for group tours Monday to Friday. They run between four and five tours a day between 9am and 4pm. For sat nav users their address and postcode is: The Chocolate Factory, Swansea West Industrial Park, Fforestfach, Swansea, SA5 4DL. To book phone 01792 56161.
Posted by RichardThomasBlog.com at 15:52