Below is my “Days Out” column from The Weekend supplement in the Saturday, August 3, 2013, issue of the South Wales Evening Post. 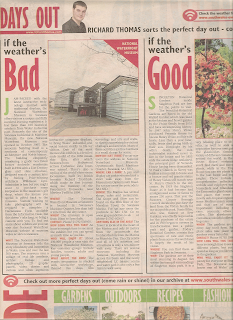 Days Out!With Richard Thomas...IF THE WEATHER'S BAD Jam-packed with the latest interactive technology married with traditional displays, the National Waterfront Museum in Swansea offers visitors a unique and fully involved learning experience for the 21st century. The museum has more than 100 historical artefacts from Wales’ industrial past. Formerly the site of the Swansea Industrial & Maritime Museum, the new National Waterfront Museum was opened in October 2005. The museum building itself is a synthesis of contemporary architecture and Welsh history. The building eloquently combining a Grade II listed former dockside warehouse built in 1902 with a 21st century glass and slate structure, designed exactly a century later by Stirling Prize-winning architects Wilkinson Eyre. Admission is free but you might want to purchase some keepsakes in the museum’s gift shop, where the money you spend is gifted back to the museum. Visitors wishing to take photographs will be required to complete a Declaration Form available from the Information Desk, but this doesn't take long, so bring a camera with you. To find out more about exhibits etc. you can visit the National Waterfront Museum website at www.museumwales.ac.uk/en/swansea.WHERE? The National Waterfront Museum at Swansea is located in Swansea's Maritime Quarter, and less than half a mile from the city centre. WHY? The National Waterfront Museum at Swansea tells the story of industry and innovation in Wales, now and over the last 300 years. The museum uses a collage of real life artefacts, archive footage and photographs, 2-D graphic panels, video diaries and various and often ingenious interactive computer displays, to bring Wales’ industrial and social history vividly to life for visitors. One of the most memorable exhibits is a detailed scale model of the 1865 steam ship Zeta, after which Swansea-born Hollywood actress Catherine Zeta Jones was named. There’s also a replica of the world's first steam locomotive, built by British inventor Richard Trevithick, which made its first journey along the tramway of the Penydarren Ironworks, near Merthyr Tydfil in 1804.WHEN? The museum is open from 10am to 5pm daily.CONTACT: Phone 01792 638950.HOW LONG WILL THIS TAKE? An hour is enough time to see most the exhibits but you can spend as much time as you like.WHO WILL ENJOY IT? About 230,000 people a year visit the National Waterfront Museum. Key customer groups include families, tourists, adults and young people.WHAT ABOUT THE KIDS? The events programme is stacked with interactive workshops, themed fun days, film screenings and arts and crafts, so there is something for visitors of all ages and interests. Many of these activities are free but there is a small charge for some.HOW TO GET THERE? For sat-nav users the address and postcode is: National Waterfront Museum, Oystermouth Road, Maritime Quarter, Swansea, SA1 3RD.WHERE CAN I PARK? A pay and display car park is situated just a short walk away from the Museum on Oystermouth Road. For sat nav users the postcode is SA1 3RD.LUNCH? The Marina has several shops, cafes and restaurants. The Grape and Olive can be found on the 28th floor of the Meridian Tower by Swansea Marina. For sat nav users the postcode is SA1 1JW. Go to www.grapeandolive.co.uk or phone 01792 462617.ANYTHING ELSE IN THE AREA? The Tower is located in the heart of the Marina and only 50 metres from the promenade that borders the bay from the Marina to Mumbles Pier. The city centre and all of it's activities and attractions is only a ten minuet walk away. There are several museums including the National Waterfront Museum across the basin and the newly refurbished LC leisure centre and water park is also only a five minute walk away....IF THE WEATHER'S GOOD

Singleton Botanical Gardens inside Singleton Park are free for the public to visit. The beautiful Botanical Gardens are based in the old Walled Garden which was used as the kitchen and flower garden by the Vivian family from 1853 and have an interesting history. In 1847 John Henry Vivian purchased Veranda House for his son Henry Vivian and his wife Jessie. Less than a year later, sadly, Jessie died giving birth to their son. Distraught by his wife’s death, the rich industrialist resolved never to live in the house and by 1853 only the estate lodge remained, the principal part of Veranda House having been dismantled. St Paul's Church in Sketty was built as a memorial to Jessie and a bronze and red granite statue of Henry Vivian still stands near St. Mary’s Church in the city centre. By 1919 the Singleton Estate as it had become had amalgamated some 12 farms to amass 250 acres. That year the Swansea County Borough Council decided to purchase the land from the Vivian family for use as a public park. Daniel Bliss, who was trained at Kew Gardens, was chiefly responsible for the purchase of the estate and in 1920 began to oversee its transformation into a public park and garden. Today’s Botanical Gardens contains fine specimens of rare and exotic plants from across the world and is largely the result of his vision.

WHERE? You can find them at Singleton Park in Swansea.

WHY? The gardens are at their most stunning in August. Set within the tranquil surroundings of Singleton main park, it is a very relaxing place to sit and relax, as well as seek some inspiration for your own garden. The glasshouses simulate a variety of different climates from around the world: in the hot Desert House environment you'll find cacti and succulent plants, while in the Tropical House you can see plants found in the rain forest and tropical jungles. These include the comprehensive collection of orchids and epiphytes such as bromeliads and tillandsias. In the Economics glasshouse you’ll find plants that come from mostly sub-tropical regions and some Mediterranean countries, and that are of economic importance, including sugar cane, coconuts, olives and coffee. This glasshouse also contains a colourful collection of begonias.

WHEN? The gardens are open every day until 8pm. Regular plant sales take place in the gardens every Saturday.

HOW LONG WILL THIS TAKE? An hour is enough time to see all the different plants, but you can spend as long as you like relaxing in the gardens.

WHO WILL ENJOY IT? There’s plenty for everyone at Singleton Park. The Botanical Gardens house one of Wales' premier collections of florae, with spectacular herbaceous borders and large glasshouses packed full of displays. The gardens are also home to Ty'r Blodau, an educational and visitor centre available for school visits, workshops and meetings.

WHAT ABOUT THE KIDS? Children will enjoy feeding the ducks. There’s also a children’s adventure playground and Crazy Golf course inside Singleton park.

HOW DO I GET THERE? You can find them at Singleton Park in Swansea. For sat nav users the postcode is SA2 8QD.

WHERE CAN I PARK? Parking can be found on Sketty Road outside Singleton Park.

ANYTHING ELSE IN THE AREA? Running along the promenade, and situated opposite the road it is named after, is Ashleigh Road Pitch & Putt golf course. The course has no handicap requirements so it is ideal for beginners of all ages and those who just want to have some fun. It is also a great course for more experienced players to brush up on their pitching and putting skills.
Posted by RichardThomasBlog.com at 12:07