My column for the August 2013 issue of Swansea Life magazine. 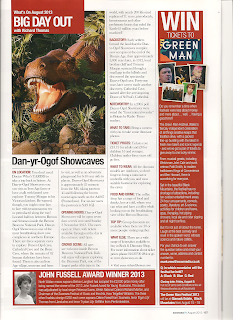 -------------------------
Big Day Out!
With Richard Thomas
Dan-yr-Ogof Showcaves in Abercrave, Swansea
ON LOCATION: You don’t need Doctor Who's TARDIS to take a trip back in history. At Dan-yr-Ogof Showcaves you can visit an Iron Age farm or have a talk with famed cave explorer Tommy Morgan in his Victorian kitchen. Be warned, though, you might come face to face with tyrannosaurus rex or pterodactyl along the way! Located halfway between Brecon and Swansea inside the Brecon Beacons National Park, Dan-yr-Ogof Showcaves is one of the most breathtaking show cave complexes in northern Europe. There are three separate caves to explore: Dan-yr-Ogof cave, Cathedral Cave and the Bone Cave, where the remains of 42 human skeletons have been found. There is also an Iron Age village, museum and farm to visit, as well as an adventure playground for 6-10 year olds to play in. Dan-yr-Ogof Showcaves is approximately 25 minuets from the M4, taking junction 45 and following the brown tourist signs north on the A4067 (Pontardawe). For sat-nav users the postcode is SA9 1GJ.
OPENING HOURS: Dan-yr-Ogof Showcaves will be open seven days a week now until Sunday 3 November 2013. The caves open at 10am, with tickets available throughout the day at the entrance until 3pm.
CROWD SCENE: All ages are welcome inside Brecon Beacons National Park. Kids will enjoy will enjouy exploring the Dinosaur Park, one of the largest parks of its type in the world, with nearly 200 life-sized replicas of T. rexes, pterodactyls, brontosaurus and other prehistoric beasts that ruled the Earth 65 million years before mankind!
BACKSTORY: Early settlers farmed the land that the Dan-yr-Ogof Showcaves complex now occupies at the end of the Bronze Age, then approximately 3,000 years later, in 1912, local brothers Jeff and Tommy Morgan squeezed though a small gap in the hillside and discovered the spectacular Dan-yr-Ogof cave. Forty-one years later cavers made another discovery, Cathedral Cave, named after the awe-inspiring Dome of St Paul’s Cathedral.
NOTEWORTHY: In a 2005 poll Dan-yr-Ogof Showcaves were voted the “finest natural wonder” in Britain by Radio Times readers.
WHAT TO TAKE: Bring a camera with you to take some dinosaur photos.
TICKET PRICES: Tickets cost £13.75 for adults and £8 for children 16 and younger. Children under three years old go free.
WHAT TO WEAR: All the dinosaur models are outdoors, so don’t forget to bring a raincoat or umbrella with you, and wear suitable footwear for exploring the caves.
FOOD AND DRINK: The coffee shop has a range of food and drinks, hot or cold, where you can relax and have a coffee while looking out on the breathtaking view of the Brecon Beacons.
TOP TIP: Group discounts are available when there are 20 or more people visiting together.
WHAT ELSE: There are a wide range of keepsakes available to buy in Rock & Dinosaur Shop. For more information about ticket prices phone 01639730 284 or go to www.showcaves.co.uk.