All the fun of the farm

Below is my “Big Day Out” column from the Saturday, June 15, 2013, Swansea edition of the South Wales Evening Post. 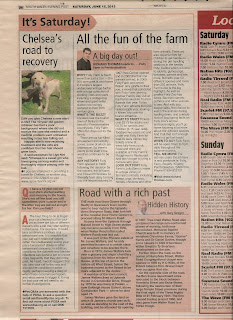 
All the fun of the farm
A big day out!
RICHARD THOMAS heads to Folly Farm near Tenby in Pembrokeshire.
WHY? Folly Farm is much more than just a zoo, the 200 acre park is also home to Europe's largest undercover vintage funfair with a huge collection of working rides and stalls including a vintage big wheel and giant helter skelter ride lovingly restored to their 20th century glory.
WHAT’S THE BUZZ? Located near the tourist town of Tenby in the beautiful Pembrokeshire countryside, Folly Farm offers affordable fun days out for the whole family. In total there are six fun-filled amusement and activity zones, some of which are undercover. So there's plenty to do even if the weather continues to be bad.
ANY HISTORY? Folly Farm opened in 1988 following the decision by the owners, the Williams and Ebsworth families, to diversify from dairy farming into the leisure industry. In 1997 Pets Corner opened and in 2002 the first zoo animals arrived. In 2009 Folly Farm welcomed Wales' only giraffe to their zoo, a move that coincided with Folly Farm winning Premier Family Day Out at the Pembrokeshire Tourism Awards that year. Today Folly Farm attracts 400,000 visitors each year, making it Wales' top paid-for tourist attraction.
WHAT TO TAKE? Tickets cost £9.75 for adults and £8.75 for seniors and children (3-15 year olds). Toddlers two years old and under visit Folly Farm for free! To save money buy tickets online at www.folly-farm.co.uk. Food and drink are available at Folly Farm’s Ploughman's Restaurant. And don’t forget to bring a camera with you.
LOOK OUT FOR? Folly Farm's Jolly Barn is home to a huge variety of farmyard animals, including sheep, pigs, donkeys, horses, chickens and other farm animals. There's also loads of opportunities for children to get hands-on during the Pet Handling sessions in the nearby Pets' Centre which is home to rabbits, guinea pigs, tortoises, parrots and lots more. But with over 50 different species and more than 250 animals, Folly Farm’s zoo is the big highlight. As well as giraffe Folly Zoo has zebra, Bactrian camels, pythons and other animals to see. And with zoo keeper talks, the chance to watch the animals during feeding times, and a whole host of fascinating facts on Folly Zoo’s animal enclosure signs, you’ll go home knowing a lot more about the different species. And if all that isn’t enough there’s even a go-kart racetrack!

WHEN TO GO? Folly Farm will be open 10am to 5pm daily throughout the summer months.