Below is my “Big Day Out” column from the Saturday, March 3, 2013, Swansea edition of the South Wales Evening Post. 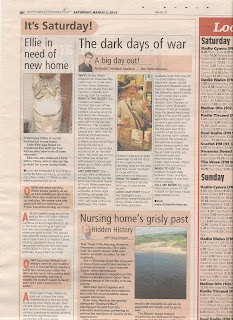 Dark days of war
A big day out!
RICHARD THOMAS heads to the 1940s Museum.
WHY? At the 1940s Museum on Swansea Bay, visitors go on a trek back in time, when Swansea was under attack from the German Luftwaffe and braising itself for invasion.
WHAT’S THE BUZZ? The museum is based in Crymlyn Burrows off the Fabian Way and contains exhibits showing what life was like in the Swansea Bay area during and in the iaftermath of the Second World War. The Museum offers a unique chance for people born after 1945 to discover for themselves what life was like for civilians on the Home Front during the war and experience the sights and sounds of an air raid first hand. You even get to find out what you could eat with a week’s rations and dress up in 1940s clothes and uniforms.
ANY HISTORY? The London Blitz are infamous around the world, but the ports and industrial towns of South Wales were also targets for the German Luftwaffe, a three-night bombing campaign on Swansea in February, 1941, left most of the city destroyed. The 1940s Museum was set up eight years ago to tell the story of the impact of the bombing raids on the area, and how locals managed to cope with the devastation of total war.
LOOK OUT FOR? One of the highlight is an authentic wartime grocer's shop, where visitors can see what products available back then are still on store shelves today. Items like Spam, tinned beans and Weetabix are all here on display - although the Weetabix used to come in a tin rather than a box, according to Museum director John Thomas. In addition short films and displays of actual material from the period help bring to life a time over 65 years ago when every Briton had to carry a gas mask and identity card with them. But the best part of the exhibition has to be the RAF plotting room, where you follow the course of the German bombers before taking cover in the air raid shelter. Then when the all clear sounds, you can stroll down the reconstructed 1940s street, past houses, shops and into the corner pub.
WHAT TO TAKE? Don’t forget to bring a camera with you to take some snaps.
WHEN TO GO? The Museum is open daily between 10am and 4pm, last admission is one hour before closing.
TELL ME MORE: For more information phone 01792 458864 or visit www.1940sswanseabay.co.uk.
Visit www.richardthomas.eu.
Posted by RichardThomasBlog.com at 23:40