Below is my “Big Day Out” column from the Saturday, February 9, 2013, Swansea edition of the South Wales Evening Post. 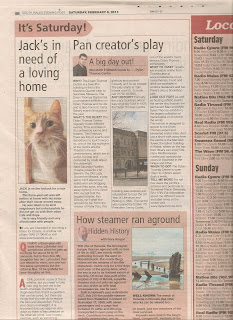 WHY? The Dylan Thomas Centre is a beautiful building in the in the Maritime Quarter near to Swansea Museum. The Dylan Thomas Centre has a permanent exhibition on Dylan Thomas and his life and is also home to many literary events throughout the year.
WHAT’S THE BUZZ? The Dylan Thomas Centre regularly hosts different events, films and talks in its conference rooms and theatre. This February there are lots of events and exhibitions to look forward to, one of the big highlights at the centre are the "Theatre-in-Focus" presentations, which are all script-in-hand and preceded by a talk about the playwright. Next Saturday (February 16 ) Fluellen Theatre present J.M. Barrie's "The Old Lady Shows her Medals", a play set in 1916 about four ladies who are bragging about their sons, who are away fighting in the Great War, except that the biggest boaster, Mrs Dowey, isn't what she appears to be. From the creator of Peter Pan, this glorious and pointed comedy isn't too be missed. The play starts at 1pm, tickets cost £5. To book call 01792 463980.
ANY HISTORY? Formerly the city's Guildhall, which was originally built in 1825, the Dylan Thomas Centre building was restored and refurbished to host the UK Year of Literature and Writing in 1995. The centre was opened by former US President Jimmy Carter, one of the world's most famous Dylan Thomas enthusiasts.
WHAT TO TAKE? Tickets are available online from Ticketsource at www.ticketsource.co.uk/dylanthomas. Food and drink are available in centre’s restaurant and bar. There’s also a bookshop café.
LOOK OUT FOR? As well as hosting artistic events, the centre also houses the permanent "Man and Myth" Dylan Thomas exhibition, the largest collection of memorabilia of its kind in the world. This exhibit is designed to appeal to the Dylan Thomas expert and interested visitor alike. And just a short walk away from the centre is the Meridian Tower, the tallest building in Wales, where on the top floor diners can enjoy first class Mediterranean cuisine and spectacular views of Swansea in the Grape and Olive.
WHEN TO GO? The Dylan Thomas Centre is open 10am to 4.30pm seven days a week.
TELL ME MORE: For sat nav users the centre's address and postcode is: Somerset Place, Swansea, SA1 1RR. For information about the different events and start times at the centre visit www.dylanthomas.com.
Visit www.richardthomas.eu.
Posted by RichardThomasBlog.com at 22:13