History of a Time Lord

Below is my “Big Day Out” column from the Saturday, February 2, 2013, Swansea edition of the South Wales Evening Post. 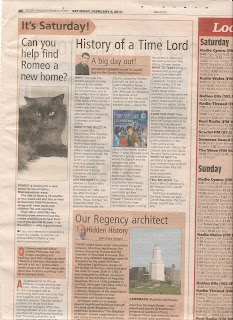 History of a Time Lord
A big day out!
RICHARD THOMAS heads to Cardiff Bay for the Doctor Who Experience.
WHY? This year the world's longest running science fiction series Doctor Who is celebrating its 50th birthday, so it is the perfect time to take a trip back through TV history and meet some of the Doctor's greatest foes, including the Daleks and their insane creator Davros, the alternate Earth Cybermen, space warrior clone Sontarans and many others.
WHAT’S THE BUZZ? At the Doctor Who Experience time travellers help the Doctor pilot the TARDIS and come face-to-face with some of the show's most iconic villains. Featuring exclusive filmed sequences with the Eleventh Doctor, Mat Smith, and packed with amazing special effects, this multi-sensory experience is fun for everyone and not just Doctor Who fans.
ANY HISTORY? The first ever episode of Doctor Who was broadcast on November 23, 1963, the day after President Kennedy was shot dead in Dallas, Texas. Entitled "An Unearthly Child" the episode introduced the Doctor, played by William Hartnell, as well as his grand daughter Susan - the "Unearthly Child" of the title. Although, an intriguing first episode which established the TARDIS and mystery of who this time traveller was - hence the name of the series Doctor Who, what followed were three very boring episodes where the Doctor and his companions were imprisoned by a tribe of cavemen in prehistoric  times. It was the next adventure "The Daleks" written by Welsh scriptwriter Terry Naton which saved the series from cancellation. Forty years later another Welshman, Swansea's own Russell T. Davies would save the Doctor from cancellation again, moving the series to Wales and reinventing Doctor Who after being on hiatus for 15 years.
LOOK OUT FOR? After your action-packed journey with the Doctor, there is so much more to see and explore. The world's most extensive collection of original Doctor Who props and artefacts includes the entire collection of Time Lord's iconic costumes from 1963 to the present day and the David Tennant TARDIS console set.
WHAT TO TAKE? Bring a camera with you to get your picture taken with Daleks, Sontarans and Cybermen. Tickets cost £15 for adults, £11 for children and £46 for a family ticket at the entrance, but discounts are available if you book your place. Advanced tickets cost £13 for adults, £9 for chldren and £38 for family tickets.
WHEN TO GO? The exhibition is open most days between 9am to 5pm. To check when they are closed visit www.doctorwhoexperience.com.
TELL ME MORE: The Doctor Who Experience is located just ten minuets from Cardiff city centre. Parking is available at Pierhead Street Car Park,  Cardiff Waterside, Pierhead Street, Cardiff Bay, CF10 4PH. To book tickets phone 08448012279.
Richard Thomas is the author of Sci-Fi Worlds - Doctor Who, Doomwatch, Battlestar Galactica And Other Cult TV Shows, available from Amazon.co.uk in paperback and as a Kindle ebook. Visit www.sci-fiworlds.com.

Email ThisBlogThis!Share to TwitterShare to FacebookShare to Pinterest
Labels: Day Out columns, Doctor Who Experience