Just the place to shop

Below is my “Big Day Out” column from the Saturday, January 7, 2012, Swansea edition of the South Wales Evening Post. 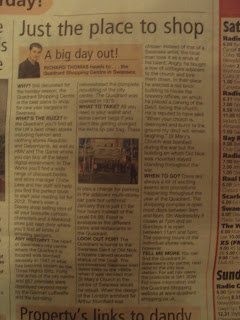 
Just the place to shop
A big day out!
RICHARD THOMAS heads to the Quadrant Shopping Centre in Swansea.
WHY? Still decorated for the holiday season, the Quadrant Shopping Centre is the best place to shop for new year bargains in Swansea.
WHAT’S THE BUZZ? In the Quadrant you’ll find all the UK’s best chain stores including fashion and clothing stores Republic and Debenhams, as well as HMV and The Game where you can buy all the latest digital entrainment. In The Works you’ll find a wide range of discount books and Store Manager Chloe Lees and her staff will help you find the perfect book to start your reading list for 2012. There’s even a Disney shop selling toys of all your favourite cartoon characters and a Menkind store just next door where you’ll find all kinds of amusing gadgets.
ANY HISTORY? The heart of Swansea’s city centre where the Quadrant is located was bombed severely in 1941 in what has become known as “Three Nights Blitz.” Forty one acres of the city centre and 857 premises were destroyed beyond repair by the German Luftwaffe and the bombing necessitated the complete rebuilding of the city centre. The Quadrant was opened in 1979.
WHAT TO TAKE? All you need is your wallet and some carrier bags if you don’t like getting charged the extra 5p per bag. There is also a small charge for parking in the adjacent multi-storey car park, but until mid January this is just £1 for four hours instead of the usual £4.50. Food is available in the different cafes and restaurants in the Quadrant.
LOOK OUT FOR? The Quadrant is home to the Swansea Devil or Old Nick, a bizarre carved wooden statue of the Devil. The controversial Swansea icon dates back to the 1890s when it was decided that St. Mary's Church in the centre of Swansea would be rebuilt. When the design of the London architect Sir Arthur Blomfield was chosen instead of that of a Swansea artist, the local man took it as a snub at his talent. Angry, he bought a row of cottages adjacent to the church and tore them down. In their place he erected a red brick building to house the brewery offices, on which he placed a carving of the Devil, facing the church. He is reputed to have said: “When your church is destroyed and burnt to the ground my devil will remain laughing.” St. Mary’s Church was bombed during the war but the building on which Old Nick was mounted stayed standing throughout the war.
WHEN TO GO? There are always a lot of exciting events and promotions happening throughout the year at the Quadrant. The shopping complex is open most days between 9am and 6pm. On Wednesday they close at 7pm and on Sundays the are open between 11am and 5pm. The open hours of the individual stores varies, however.
TELL ME MORE: You can find the Quadrant in Swansea’s city centre, next door to the city bus station. For sat nav users their postcode is SA1 3QW.
For more information visit the Quadrant Shopping website at www.quadrantshopping.co.uk.
Posted by Unknown at 21:11 No comments:

Below is my “Big Day Out” column from the Saturday, December 31, 2011, Swansea edition of the South Wales Evening Post. 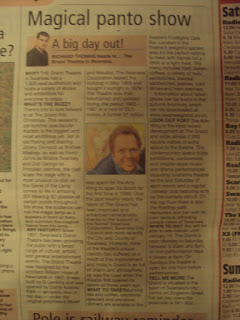 Magical Panto show
A big day out!
RICHARD THOMAS heads to …
The Grand Theatre in Swansea.
WHY? The Grand Theatre in Swansea has a 1,000-seat auditorium and hosts a wide variety of shows and exhibitions for everyone to enjoy.
WHAT’S THE BUZZ? There’s lots to look forward to at The Grand this Christmas. This season’s pantomime spectacular Aladdin is the biggest and most ambitious yet! Set in old Peking and starring Jimmy Osmond as Wishee Washee, as well as Kevin Johns as Widow Twankey and Zoë George as Princess Jasmine, the cast share the stage with a most unusual co-star as the Genie of the Lamp comes to life in amazing 3D! Wearing 3D glasses at certain points throughout the show the audience can rub the magic lamp as it appears in front of them and summon the magical Genie from his lamp!
ANY HISTORY? Since 1897, Swansea's Grand Theatre has been providing the public with a broad range of cultural, artistic and general entertainment events. The Grand Theatre was designed by the architect William Hope of Newcastle in 1897. It was built by D. Jenkins and was opened by Madam Adelina Patti - an Opera Diva of her day - under the original proprietors Morell and Mouillot.
The Swansea Corporation leased the building in May 1969 and bought it outright in 1979. The Theatre was then refurbished and updated during the period 1983 - 1987 at a cost of £6.5 million. A further £1 million was spent for the Arts Wing to open its doors for the first time in 1999.
Over the last twenty years, the fabric of "The Grand" has been improved and enhanced considerably, thanks to the support of the former Swansea Corporation, Swansea City Council and more recently the City and County of Swansea. However, none of the theatre's unique identity has suffered as a result of this improvement and today's Grand is as full of charm and atmosphere as was the case when the theatre first opened its doors all those years ago.
WHAT TO TAKE? Morning tea and coffee, lunchtime specials and pre-show dinners are available in the theatre’s Footlights Café Bar. Located in the theatre’s delightful garden area it's the perfect setting to meet with friends for a drink or a light meal. The menu includes fresh Italian coffees, a variety of teas, sandwiches, toasted sandwiches, pasties, cold drinks and fresh pastries.
Information about ticket prices can be found in the Autumn Brochure, which can be downloaded at www.swanseagrand.co.uk.
LOOK OUT FOR? The Arts Wing is the most recent development at The Grand and adds almost 2000 square metres of extra space to the theatre. The contemporary space holds exhibitions, conferences and smaller-scale music and drama performances including lunchtime theatre on the last Saturday of each month and a regular comedy club featuring acts on the comedy circuit. On the top floor there is also the Rooftop Café, Restaurant and Bar with it's own terrace, affording unique views of Swansea.
WHEN TO GO? You wil be able to see Aladdin until 15 January. The Grand is open Monday to Saturday between 9.30am to 8pm, on non performance days they close at 6pm. On Sundays the theatre is open for one hour before performances.
TELL ME MORE: The Grand is situated in the heart of Swansea’s city centre on Singleton Street. For sat nav users their postcode is SA1 3QJ. To book your tickets call the Box Office on 01792 475715.
Posted by Unknown at 20:24 No comments:

Below is my “Big Day Out” column from the Saturday, December 24, 2011, Swansea edition of the South Wales Evening Post. 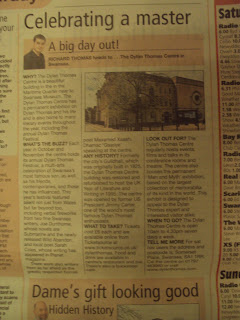 Celebrating a master
big day out!
RICHARD THOMAS heads to ...
The Dylan Thomas Centre in Swansea.
WHY? The Dylan Thomas Centre is a beautiful building in the in the Maritime Quarter near to Swansea Museum. The Dylan Thomas Centre has a permanent exhibition on Dylan Thomas and his life and is also home to many literary events throughout the year, including the annual Dylan Thomas Festival now underway at the centre.
WHAT’S THE BUZZ? Each year in October and November the centre holds its annual Dylan Thomas Festival, a multi-arts celebration of Swansea's most famous son, as well as his friends, contemporaries, and those he has influenced. This year’s festival featured talent not just from Wales but far beyond too, including verbal fireworks from two fine Swansea writers, Joe Dunthorne, whose novels are Submarine and the newly released Wild Abandon, and local poet Sarah Coles, whose writing has appeared in Planet magazine. There were also writers from as a field as the greatly respected Somali poet Maxamed Xaashi Dhamac 'Gaariye' speaking at the centre.
ANY HISTORY? Formerly the city's Guildhall, which was originally built in 1825, the Dylan Thomas Centre building was restored and refurbished to host the UK Year of Literature and Writing in 1995. The centre was opened by former US President Jimmy Carter, one of the world's most famous Dylan Thomas enthusiasts.
WHAT TO TAKE? Tickets cost £6 each and are available online from Ticketsource at www.ticketsource.co.uk/dylanthomas. Food and drink are available in centre’s restaurant and bar. There’s also a bookshop café.
LOOK OUT FOR? The Dylan Thomas Centre regularly hosts events, films and talks in its conference rooms and theatre. The centre also houses the permanent 'Man and Myth' exhibition, based on the largest collection of memorabilia of its kind in the world. This exhibit is designed to appeal to the Dylan Thomas expert and interested visitor alike.
WHEN TO GO? The Dylan Thomas Centre is open 10am to 4.30pm seven days a week.
TELL ME MORE: For sat nav users their address and postcode is: Somerset Place, Swansea, SA1 1RR. For more information about events at the centre call 01792 463980 or visit www.dylanthomas.com.
Posted by Unknown at 20:16 No comments: