Below is my “Big Day Out” column from the Saturday, December 15, 2012, Swansea edition of the South Wales Evening Post. 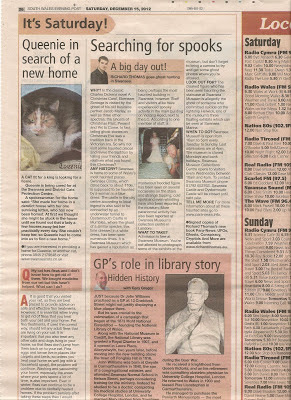 WHY? In the classic Charles Dickens novel A Christmas Carol, Ebenezer Scrooge is visited by the ghost of his old business partner Jacob Marley, as well as three other spectres, the Ghosts of Christmas Past, Present, and Yet to Come. In fact, telling ghost stories on Christmas Eve was a tradition back in the Victorian era. So why not visit some haunted places and revive the tradition by telling your friends and relatives what you found this Christmas?
WHERE TO GO? Swansea is home to some of Wales' most haunted places. Swansea Castle which dates back to about 1106 is supposed to be haunted by a woman in a blue dress. The castle in the city centre according to local legend is also said to be connected by an underwater tunnel to Oystermouth Castle in Mumbles, where the ghost of a similiar spectre, this time dressed in a white dress has been seen numerous times. It is Swansea Museum which has gained a reputation as being perhaps the most haunted building in Swansea, however. Staff and visitors alike have experienced spooky activity in the main building on Victoria Road, next to the LC2. According to one member of staff a mysterious "hooded figure" has been seen on several occasions on the stairs and strange tapping, cold spots and even whistling have also been reported in the museum. More paranormal activity has also been reported at Swansea Museum's collection centre in Landore.
WHAT TO TAKE? Admission is free at Swansea Museum. You’re not allowed to photograph some of the exhibits at the museum, but don't forget to bring a camera to try and get some ghost photos where you're allowed.
LOOK OUT FOR? The cloaked figure who has been seen haunting the staircase at Swansea Museum is allegedl the ghost of someone who committed suicide on the lightship Helwick, one of the museum's three floating exhibits which can be seen at Swansea Marina.
WHEN TO GO? Swansea Museum is open from 10am to 5pm every Tuesday to Sunday. Last admissions are at 4pm. The museum is closed Mondays and bank holidays. Swansea Museum Collections Centre opens to visitors every Wednesday between 10am and 4pm. To contact Swansea Museum phone 01792 653763. Swansea Castle and Oystermouth Castle will be closed until next year.
TELL ME MORE: For more information about all these haunted sites go to www.para-news.info.
Signed copies of Richard Thomas's new book Para-News: UFOs, Ghosts, Conspiracy, Cryptids And More are available from www.richardthomas.eu.
Posted by RichardThomasBlog.com at 20:39