My column for the November 2012 issue of Swansea Life magazine. 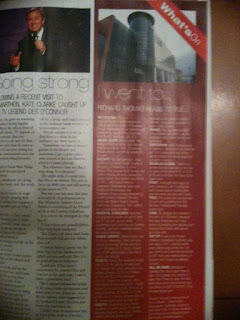 I went to...
RICHARD THOMAS heads to Vue
ON LOCATION: The Vue is a new state-of-the-art cinema located on York Street in the centre of Swansea. For sat-nav users the full address and postcode is: Vue Cinema Swansea, York Street, Swansea, SA1 3LZ.
CROWD SCENE: Mostly under 30s, many of them students, but depends what time you go. With 12 screens there's always something suitable for all ages.
HISTORY: The Vue opened in 2006, but there is a much longer histroy of film going in Swansea. In 1914 Wales’ first purpose built cinema, the Carlton Cinema de Luxe, opened on Oxford Street. The Carlton was closed in 1977, and is now home to Swansea's Waterstones branch. Nearby on the Kingway was Swansea's Plaza cinema designed by Cardiff architect Howard Williams, which was Wales' largest cinema from when it opened in 1931 until it was pulled down in 1964.
SHOW BUSINESS: Now showing at The Vue is Dredd 3D. In this visually spectacular take on the legendary Judge Dredd from the 2000AD comics, Dredd (Karl Urban) is an extreme law enforcer operating in the nightmarish conditions of Mega-City One, a sprawling future metropolis, which is dangerously over-populated and where violent crime is soaring. With other judges being murdered, Dredd has the ultimate power to execute wrong-doers. Joined by a young trainee, Judge Anderson (Olivia Thirlby), he is targeting a drugs gang warping minds with a narcotic known as SLO-MO. And he's taking no prisoners. Another sci-fi blockbuster now showing at The Vue is Total Recall, a remake of Arnold Schwarzenegger's 1990 film based on a short story by Blade Runner author Philip K.Dick. Set at the end of the century, a factory worker, Douglas Quaid (Colin Farrell), begins to suspect that he is a spy after buying memory implants of a life he wishes he had goes wrong and he finds himself on the run. There are also lots of other films to choose from if your not a sci-fi fanatic, including TED, a  laugh-out-loud-funny film about a man whose life is being ruined by his childhood teddy bear coming to life.
PARENTAL GUIDELINES: Kids and accompanying adults can get in from just £1.50 with special family screenings each Saturday and Sunday morning, and even weekdays during the school holidays.
SENIOR SERVICE: Senior tickets cost £5.85 on weekends. There are also special screenings for the over 60s every Thursday at 11.30pm, tickets cost £3.05 and includes a free tea or coffee and biscuits.
TICKETS: During the weekend tickets cost £7.85 for adults (19 and over). For younger film goers the prices are slightly cheaper, £5.85 for children (2-12) and £6.25 for teenagers (13-18). Tickets for students with a valid photo ID only cost £6.65. Family tickets for 4 cost £23.40. There is an extra charge for 3D tickets of £2 for adults and £1.50 for everyone else. A 3D family ticket costs an extra £6.
SWEETS: Completing your cinema experience a wide variety of snacks including popcorn, hot dogs, nachos, sweets and soft drinks are all available at the cinema’s snacks counter. Combos are available to save a little money.
DRINKS: The Vue also benefits from a speed bar where you can kick back with a beer before your film starts.
AUDITORIUM: With an impressive 12 screens, the cinema can seat up to 1,762 people and has all the latest facilities you would expect of a modern cinema.
PROJECTION: The Vue is equipped with wall-to-wall screens and digital projectors, enabling film fans to experience all the latest blockbusters in ever better 3D animation!
DISABLED ACCESS: There is a wheelchair bay available at the rear of some of the screens (1, 2, 3, 8 or 9) and a lift from the foyer to the upper level.
TOILETS: There is an accessible toilet by the entrance to screens 4 and 9. Further accessible toilets are available on the second floor by the rear of screens 2 and 3.
STAFF: Dedicated and happy to help costumers, be it finding the best money saving combo deal or holding your popcorn while you find your ticket.
PROS: Film goers can save at least 25% by visiting the Vue Monday, Tuesday and Thursday before 5pm.
CONS: 3D glasses are included in the price of a 3D ticket. However, this does mean you can't save money by keeping your glasses and bringing them back with you on your next visit.
TOP TIP: If you’re an Orange mobile or broadband customer, you can enjoy 2 for 1 cinema tickets every Wednesday at the Vue. All you need to do is text the word Film to 241 from your mobile phone, or register your Orange broadband account. Visit www.web.orange.co.uk/p/film/cinema_tickets.
TELL ME MORE: Monday to Saturday the Vue is open 9am to 5pm. On Sundays the cinema is open from 10am to 4pm. For film start times and to book tickets you can phone on 08712240240, or go to www.myvue.com.
Richard Thomas is the author of Sci-Fi Worlds - Doctor Who, Doomwatch, Battlestar Galactica And Other Cult TV Shows available from Amazom and all good ebook retailers. Visit www.richardthomas.eu.
Posted by RichardThomasBlog.com at 18:58