Below is my “Big Day Out” column from the Saturday, October 27, 2012, Swansea edition of the South Wales Evening Post. 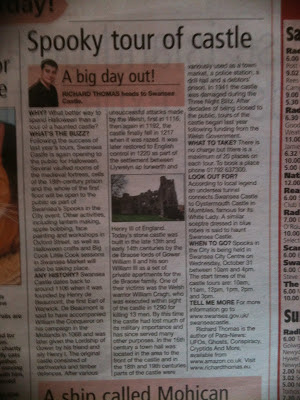 WHY? What better way to spend Halloween than to take a tour of a haunted castle?
WHAT’S THE BUZZ? Following the success of last year’s tours, Swansea Castle is again opening to the public for Halloween. Several vaulted rooms of the medieval fortress, cells of the 18th century prison and the whole of the first floor will be open to the public as part of Swansea’s Spooks in the City event. Other activities too, including lantern making, apple bobbing, face painting and workshops in Oxford Street, as well as Halloween crafts and Big Cook Little Cook sessions in Swansea Market will also be taking place as part of the event.
ANY HISTORY? Swansea Castle dates back to around 1106 when it was founded by Henry de Beaumont, the first Earl of Warwick. De Beaumont is said to have accompanied William the Conqueror on his campaign in the Midlands in 1068 and was later given the Lordship of Gower by his friend and ally Henry I. The original castle consisted of earthworks and timber defences. After various unsuccessful attacks made by the Welsh, first in 1116, then again in 1192, the castle finally fell in 1217 when it was razed to the ground. It was later restored to the English control in 1220 as part of the settlement between Llywelyn ap Iorwerth and Henry III of England. Today’s stone castle was built in the late 13th and early 14th centuries by the de Braose lords of Gower William II and his son William III as a set of private apartments for the de Braose family. One of their victims was the Welsh warrior William Cragh, who was executed within sight of the castle in 1290 for killing 13 men. By this time the castle had lost much of its military importance and has since served many other purposes. In the 16th century a town hall was located in the area to the front of the castle and in the 18th and 19th centuries parts of the castle were variously used as a town market, a police station, a drill hall and a debtors’ prison. In 1941 the castle was damaged during the “Three Night Blitz”. After decades of being closed to the public, tours of the castle began last year following funding from the Welsh Government.
LOOK OUT FOR? According to local legend an undersea tunnel connects Swansea Castle to Oystermouth Castle in Mumbles, famous for its White Lady. A similar sceptre dressed in blue robes is said to haunt Swansea Castle.
WHAT TO TAKE? There is no charge but there is a maximum of 20 places on each tour. To book a place phone 01792 637300.
WHEN TO GO? Spooks in the City is being held in Swansea City Centre on Wednesday 31 October between 10am and 4pm. The start times of the castle tours are: 10am, 11am, 12pm, 1pm, 2pm and 3pm. TELL ME MORE: For more information go to www.swansea.gov.uk/swanseacastle.
Richard Thomas is the author of Para-News: UFOs, Ghosts, Conspiracy, Cryptids And More, available from www.amazon.co.uk and all good book retailers. Visit www.richardthomas.eu.
Posted by RichardThomasBlog.com at 17:32