Below is my “Big Day Out” column from the Saturday, October 20, 2012, Swansea edition of the South Wales Evening Post. 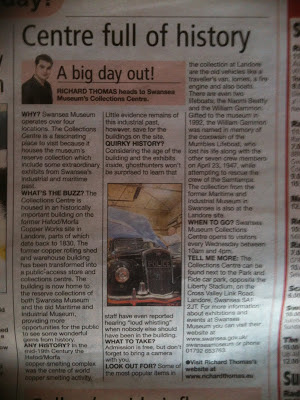 Centre full of history
A big day out!
RICHARD THOMAS heads to Swansea Museum’s Collections Centre at Landore.
WHY? Swansea Museum operates over four locations. The Collections Centre is a fascinating place to visit because it houses the museum's reserve collection which include some extraordinary exhibits from Swansea’s industrial and maritime past.
WHAT'S THE BUZZ? The Collections Centre is housed in an historically important building on the former Hafod/Morfa Copper Works site in Landore, parts of which date back to 1830. The former copper rolling shed and warehouse building has been transformed into a public-access store and collections centre. The building is now home to the reserve collections of both Swansea Museum and the Maritime and Industrial Museum, providing more opportunities for the public to see some wonderful gems from history.
ANY HISTORY? In the mid-19th century the Hafod/Morfa copper-smelting complex was the centre of world copper smelting activity. Little evidence remains of this industrial past, however, save for the buildings on the site.
QUIRKY HISTORY? Considering the age of the building and the exhibits inside, ghost hunters won’t be surprised to learn that staff have even reported hearing “loud whistling” when nobody else should have been in the building.
WHAT TO TAKE? Admission is free but don’t forget to bring a camera with you.
LOOK OUT FOR? Some of the most popular items in the collection at Landore are the old vehicles like a traveller's van, lorries, a fire engine and also boats. There are even two lifeboats; the Naomi Beatty and the William Gammon. Gifted to the museum in 1992, the William Gammon was named in memory of the coxswain of the Mumbles lifeboat, who lost his life along with the other seven crew members on April 23, 1947, whilst attempting to rescue the crew of the Samtampa. The collection from the former Maritime and Industrial Museum in Swansea is also at the Landore site.
WHEN TO GO? Swansea Museum Collections Centre opens to visitors every Wednesday between 10am to 4pm.
TELL ME MORE: The Collections Centre can be found next to the Park and Ride car park, opposite the Liberty Stadium, on the Cross Valley Link Road, Landore, Swansea, SA1 2JT. For more information about exhibitions and events at Swansea Museum you can visit their website at www.swansea.gov.uk/swanseamuseum or phone 01792 653763.
Visit Richard Thomas's website at www.richardthomas.eu.
Posted by RichardThomasBlog.com at 17:44