Such a sweet day out

Below is my “Big Day Out” column from the Saturday, September 8, 2012, Swansea edition of the South Wales Evening Post. 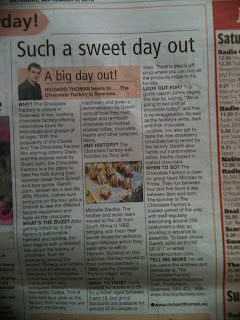 Such a sweet day out
A big day out!
RICHARD THOMAS heads to ... The Chocolate Factory in Swansea.
WHY? The Chocolate Factory is unique in Swansea: a real, working chocolate factory offering informative tours for individuals and groups of all ages. With the popularity of the Charlie And The Chocolate Factory film starring Johnny Depp, and the original novel by Roald Dahl, The Chocolate Factory is a fun place to take the kids during their summer break from school. And tour guide, Gareth John, almost like a real-life Willy Wonka, makes sure everyone on the tour gets a chance to see the different factory equipment and taste all the chocolate.
WHAT’S THE BUZZ? After getting kitted up in the factory’s fashionable hairnets and aprons, the tour begins with a detailed talk about the history of chocolate, from its popularity among the ancient Olmecs and Aztecs of Central America to its discovery by Christopher Columbus and the Spanish Conquistador who conquered Mexico, Hernando Cortes. This is followed by a walk on the factory floor where you are shown the factory machinery and given a demonstration by Gareth John of how they melt, temper and re-mould chocolate into football shaped lollies, chocolate hearts and other bespoke items.
ANY HISTORY? The Chocolate Factory was founded by Tony and Michelle Wadley. The brother and sister team moved to the UK from South Africa in 1992, bringing with them their secret recipe for delicious sugar lollipops which they were able to sell to the major high street retailer, Harrods. Building on this success, the two moved to their current premises in 1999 and The Chocolate Factory began doing school tours.
LOOK OUT FOR? Tour guide Gareth Johns begins the tour by saying, “We’re going to eat a lot of chocolate today!” and this is no exaggeration. As well as the factory’s white, dark and milk chocolate varieties, you also get to taste the new strawberry chocolate being tested by the factory. Gareth also hands out marshmallow lollies, freshly dipped in melted chocolate from one of the factory’s chocolate kettles. WHAT TO TAKE? Tours cost £8 for adults and £6 for children aged between 3 and 16, but group discounts are available for groups of 25 people or more. Cameras are allowed and visitors are encouraged to take photographs throughout the tour. There is also a gift shop where you can buy all the products made in the factory.
WHEN TO GO? The Chocolate Factory is open for group tours Monday to Friday. They run between four and five tours a day between 9am and 4pm. The summer is The Chocolate Factory’s busiest period of the year, with staff regularly welcoming around 200 costumers a day, so booking in advance is essential. To book phone Gareth John on 01792 561617 or email tours@michton.com.
TELL ME MORE: For sat nav users the address and postcode is: The Chocolate Factory, Swansea West Industrial Park, Fforestfach, Swansea, SA5 4DL. Visit www.thechocfactory.com.
Richard Thomas's new book Sci-Fi Worlds is available from Amazon. Visit www.richardthomas.eu.
Posted by RichardThomasBlog.com at 16:49