Below is my “Big Day Out” column from the Saturday, September 22, 2012, Swansea edition of the South Wales Evening Post. 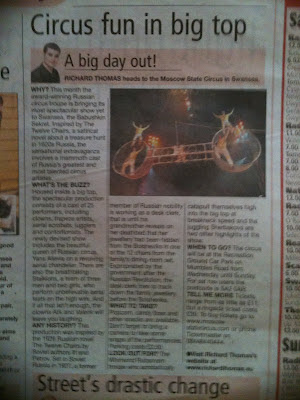 Circus fun in big top
A big day out!
RICHARD THOMAS heads to the Moscow State Circus in Swansea.
WHY? This month the award-winning Russian circus troupe are bringing their most spectacular show yet to Swansea, the Babushkin Sekret. Inspired by The Twelve Chairs, a satirical novel about a treaure hunt in 1920s Russia, the sensational extravaganza involves a mammoth cast of Russia's greatest and most talented circus artistes.
WHAT’S THE BUZZ? Housed inside a chapiteau big top, the spectacular production consists of a cast of twenty-five performers, including clowns, trapeze artists, aerial acrobats, jugglers and contortionists. The newly devised show includes the beautiful Queen of Russian Circus, Yana Alievia, on a revolving ariel chandelier. There are also the breathtaking Stalkions, a team of three men and two girls, who perform unbelievable aerial feats on the high wire. And if all that isn't enough the clowns Alik and Valerik will have you falling over with laughter.
ANY HISTORY? The latest production of the circus, the Babushkin Sekret, was inspired by the 1928 Russian novel The Twelve Chairs by Soviet authors Ilf and Petrov. Set in Soviet Russia in 1927, a former member of Russian nobility is working as a desk clerk, that is until his grandmother reveals on her deathbed that her jewellery had been hidden from the Bolsheviks in one of the twelve chairs from the family's dining room set. Expropriated by the government after the Russian Revolution, the desk clerk tries to track down the family jewellery before the Bolsheviks.
WHAT TO TAKE? Popcorn, candy floss and other snacks are available. Don't forget to bring a camera to take some snaps of the performances. Parking costs £2.50.
LOOK OUT FOR? The Whirlwind Rubsovsm troupe who acrobatically catapult themselves high into the big top at breakneck speed and the juggling Sherbakovs, are two other highlights of the show.
WHEN TO GO? The circus will be at the Recreation Ground Car Park on Mumbles Road from Wednesday 26 until Sunday 30 September. For sat nav users the postcode is SA2 0AR.
TELL ME MORE: Tickets range from as little as £11, but a Ringside ticket costs £30. To buy tickets go to www.moscowstatecircus.com or phone Ticketmaster on 08448440444.
Visit Richard Thomas's website at www.richardthomas.eu.
Posted by RichardThomasBlog.com at 18:22