Below is my “Big Day Out” column from the Saturday, August 4, 2012, Swansea edition of the South Wales Evening Post. 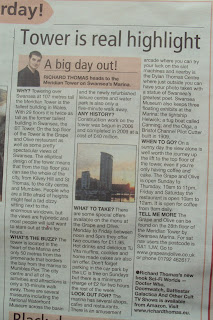 
Tower is real highlight
A big day out!
RICHARD THOMAS heads to the top floor of the Meridian Tower on Swansea's Marina.
WHY? Towering over Swansea at 107 metres tall the Meridian Tower is the tallest building in Wales. With 29 floors it is twice as tall as former tallest building in Swansea, the BT Tower completed in 1970. On the top floor of the Tower is the Grape and Olive restaurant, offering diners first class Mediterranean cuisine and spectacular views of Swansea. The elliptical design of the Tower means that from the top floor you can see the whole of the city, from Kilvey Hill and St Thomas, to the city centre and Mumbles. People who are a little afraid of heights might feel a bit dizzy sitting next to the enormous windows, but the views are hypnotic and most people will just want to stare out at them for hours.
WHAT’S THE BUZZ? The Tower is located in the heart of the Marina and only 50 metres from the promenade that borders the bay from the Marina to Mumbles Pier. The city centre and all of it's activities and attractions is only a ten minuet walk away. There are several museums including the National Waterfront Museum across the basin and the newly refurbished LC leisure centre and water park is also only a five minute walk away.
ANY HISTORY? Construction work on the Tower was begun in 2006 and completed in 2009 at a a cost of £40million. Sadly, on 26 January 2008, one of the construction workers died after falling three storeys from the Tower.
WHAT TO TAKE? There are some special offers available on the menu at the Grape and Olive. Monday to Friday between 12pm and 5pm they offer two courses for £11.95. Hot drinks and delicious Tu Vita muffins, cookies and home made cakes are also on offer. Don't forget parking in the car park by the LC is free on Sundays but there is a minimum charge of £2 for two hours the rest of the week.
LOOK OUT FOR? The Marina has several shops, cafes and restaurants. There is an amusement arcade where you can try your luck on the slot machines and nearby is the Dylan Thomas Centre where just outside you can have your photo taken with a statue of Swansea's greatest poet. Swansea Museum also keeps three floating exhibits at the Marina: the lightship Helwick; a tug boat called Canning; and the Olga, a Bristol Channel Pilot Cutter built in 1909.
WHEN TO GO? On a sunny day the view alone is well worth the journey up the lift to the top floor of the Tower, even if you're only having coffee and cake. The The Grape and Olive is open Sunday to Thursday, 10am to 11pm. Friday and Saturday the restaurant is open 10am to 12am. They are open for coffee from 9am daily.
TELL ME MORE: The Grape and Olive can be found on the 28th floor of the Meridian Tower by Swansea Marina. For sat nav users the postcode is SA1 1JW. Go to www.grapeandolive.co.uk or phone 01792 462617.