Below is a "Heaven and Hell" feature about my favourite and least favourite holidays I did for the 28 July, 2012 issue of the South Wales Evening Post. 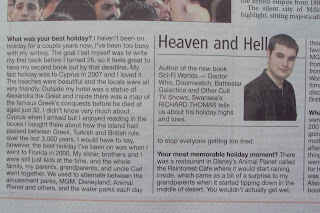 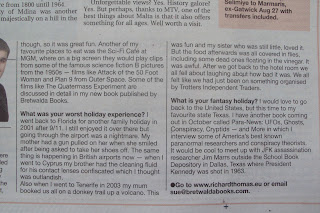 Author of the new book Sci-Fi Worlds - Doctor Who, Doomwatch, Battlestar Galactica And Other Cult TV Shows, Swansea's RICHARD THOMAS tells us about his holiday highs and lows.
What was your best holiday? I haven't been on holiday for a couple years now, I've been too busy with my writing. The goal I set myself was to write my first book before I turned 26, so it feels great to have my second book out by that deadline. My last holiday was to Cyprus in 2007 and I loved it there, the beaches were beautiful and the locals were all very friendly. Outside my hotel was a statue of Alexandra the Great and inside there was a map of the famous Greek’s conquests before he died at the age of only 32. I didn't know very much about Cyprus when I arrived but I enjoyed reading in the books I bought there about how the island had passed between Greek, Turkish and British rule over the last 3,000 years.
I would have to say however the best holiday I've been on was when I went to Florida in 2000. Me, my sister and brothers were still just kids at the time, and the whole family, my parents, grandparents, and uncle Carl went together. We used to alternate between the amusement parks, MGM, Disneyland, Animal Planet and others, and the water parks each day to stop everyone getting too tired.
What was your most memorable holiday moment? In Florida there were lots of memorable moments. There was a restaurant in Disney's Animal Kingdom called the Rainforest Cafe where it would start raining inside, which came as a bit of a surprise to my grandparents when it started tipping down in the middle of desert. You wouldn’t actually get wet, though, so it was great fun. Another of my favourite places to eat was the Sci-Fi Café at MGM, where on a big screen they would play clips from some of the famous science fiction B pictures from the 1950's. Films like Attack of the 50 Foot Woman and Plan 9 from Outer Space. Some of the films like The Quatermass Experiment are discussed in detail in my new book Sci-Fi Worlds published by Bretwalda Books.
What was your worst holiday experience? I went back to Florida for another family holiday in 2001 after 9/11. I sill enjoyed it over there but going through the airport was a nightmare. My mother had a gun pulled on her when she smiled after being asked to take her shoes off, and I saw lots of other people being harassed like this. The same thing is happening in British airports now, when I went to Cyprus my brother had the cleaning fluid for his contact lenses confiscated which I thought was outlandish. How 9/11 and the War on Terror has been reflected in shows like Doctor Who and Battlestar Galactica is a topic I tackle a lot in Sci-Fi Worlds.
I would have to say my worst holiday experience, though, was when I went to Tenerife in 2003. My mum booked us all on a donkey trail up the volcano. This was fun and my sister who was still little loved it, but the food afterwards was all covered in flies, including  some dead ones floating in the vinegar. It was awful. After we got back to the hotel room we all fell over laughing about how bad it was. We all felt like we had just been on something organised by Trotters Independent Traders.
What is your fantasy holiday? I would love to go back to the United States, but this time to my favourite state Texas. I have another book coming out in October called ‘Para-News: UFOs, Ghosts, Conspiracy, Cryptids - and More’ in which I interview some of America’s best known paranormal researchers and conspiracy theorists. It would be cool to meet up with JFK assassination researcher Jim Marrs outside the School Book Depository in Dallas, Texas where President Kennedy was shot in 1963. Jim wrote the best-selling book Crossfire which was the basis for Oliver Stone’s film JFK. Another Texas resident I interviewed is Nick Redfern, who has also written the foreword for Para-News. Nick is a full-time author of books about UFOs, mystery animals and conspiracies, and has been a big help to me.
How did your book Sci-Fi Worlds come about and where can readers find it? In 2008 I started writing a science fiction/TV related column for Alien Worlds magazine which led to me writing for some other magazines and blogs; and of course my Saturday columns for the Evening Post. Sci-Fi Worlds - Doctor Who, Doomwatch, Battlestar Galactica And Other Cult TV Shows is a collection of my favourite sci-fi related articles and interviews I've done over the past four years. Included are interviews with X-Files star Dean Haglund and Lexx co-creator Lex Gigeroff, as well as Doctor Who writer Lance Parkin. You can find the book by searching 'Sci-Fi Worlds by Richard Thomas' on Amazon.co.uk. My next book Para-News: UFOs, Ghosts, Conspiracy, Cryptids - and More is also available for pre-order from Amazon and all good book retailers.
For more information about Richard Thomas's books go to www.richardthomas.eu or email sue@bretwaldabooks.com.