Below is my “Big Day Out” column from the Saturday, July 21, 2012, Swansea edition of the South Wales Evening Post. 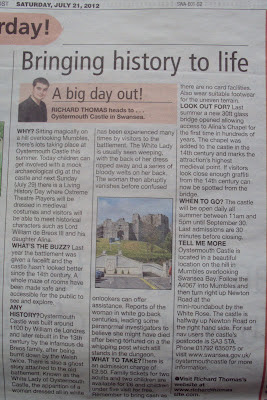 
Bringing history to life
A big day out!
RICHARD THOMAS heads to Oystermouth Castle in Swansea.
WHY? Sitting magically on a hill overlooking Mumbles Bay, there's lots taking place at Oystermouth Castle this summer. Today (July 21) children can get involved with a mock archaeological dig at the castle and next Sunday (July 29) there is a Living History Day where Ostreme Theatre Players will be dressed in medieveal costumes and visitors will be able to meet historical characters like Lord William de Braos III and his daughter Alina.
WHATS THE BUZZ? Last year the battlement was given a facelift and the castle hasn't looked better since the 14th century. A whole maze of rooms have been made safe and accessible for the public to see and explore this summer.
ANY HISTORY? Oystermouth Castle was built around 1100 by William de Londres and later rebuilt in the 13th century by the infamous de Breos family, after being burnt down by the Welsh twice. There is also a ghost story attached to the old battlement. Known as The White Lady of Oystermouth Castle the apparition of a woman dressed all in white has been experienced many times by visitors to the battlement. The White Lady is usually seen weeping, with the back of her dress ripped away and a series of bloody welts on her back. The woman then abruptly vanishes before confused onlookers can offer her any assistance. Reports of the woman in white go back centuries, leading some paranormal investigators to believe she might have died after being tortured on the medieval whipping post which still stands in the castle’s dungeon.
WHAT TO TAKE? There is a small charge of £2.50 for admission into the castle. Family tickets for two adults and two children are available for £6 and children under five visit for free. Rememer to bring cash with you as there are no credit/debit card facilities on the castle site. Also wear suitable footwear for the uneven terrain.
LOOK OUT FOR? Last Summer a new 30-foot-high glass bridge opened allowing access to the part of the castle called Alina's Chapel for the first time in hundreds of years. The chapel was added to the castle in the 14th century and marks the attraction’s highest medieval point. If visitors look close enough graffiti art from the 14th century can be spotted thanks to the improved view.
WHEN TO GO? The castle will be open daily all summer between 11am and 5pm until 30 September. Last admissions are 30 minutes before closing.
TELL ME MORE: Oystermouth Castle is located in a beautiful location on the hill in Mumbles overlooking Swansea Bay. Follow the A4067 into Mumbles and then turn right up Newton Road at the mini-roundabout by the White Rose. The castle is halfway up Newton Road on the right hand side. For sat nav users the castle’s postcode is SA3 5TA. Phone 01792 635075 or visit www.swansea.gov.uk/oystermouthcastle for more information.
Visit Richard Thomas's website at www.richardthomassite.com.
Posted by RichardThomasBlog.com at 19:53