Below is my “Big Day Out” column from the Saturday, May 19, 2012, Swansea edition of the South Wales Evening Post. 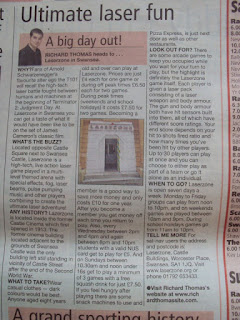 WHY? Fans of Arnold Schwarzenegger's favourite alter ego the T101 will recall the high-tech laser battle fought between humans and machines at the beginning of Terminator 2: Judgment Day. At Laserzone in Swansea you can get a taste of what it would have been like to be on the the set of James Cameron’s classic film, while you and your team take part in your own futuristic warfare.
WHAT’S THE BUZZ? Located opposite Castle Square next to Swansea Castle, Laserzone is a high-tech, live action laser game played in a multi-level themed arena with special effects, fog, laser beams, pulse pumping music and other players/targets combining to create the ultimate laser adventure!
ANY HISTORY? Lazerzone is located inside the former Castle Cinema which first opened in 1913. The former cinema building located adjacent to the grounds of Swansea Castle was the only building left still standing in vicinity of Swansea's Castle Street after the end of the Second World War.
LOOK OUT FOR? There are some arcade games to keep you occupied while you wait for your turn to play, but the highlight is definitely the Laserzone game itself. Each player is given a laser pack consisting of a laser weapon and body armour. The gun and body armour both have hit sensors built into them, all of which have different score ratings. Your end score depends on your hit to shots fired ratio and how many times you’ve been hit by other players. Up to 30 players can play at once and you can choose to either play as part of a team or go it alone as an individual.
WHAT TO TAKE? Wear casual clothes, dark colours would be best. Anyone aged eight years old and over can play at Laserzone. Prices are just £4 each for one game or during off peak times £6.50 each for two games. During peak times (weekends and school holidays) it costs £7.50 for two games. Becoming a member is a good way to save more money and only costs £10 for one year, after you become a member you get money off each time you return to play. Also, every Wednesday between 2pm and 4pm and again between 8pm and 10pm students with a valid NUS card get to play for £5. And on Sundays between 10.30am and 12pm under 16’s get to play a minimum of 3 games with a free squash drink for just £7.50. If you feel hungry after playing there are some snack machines to use and a pizza restaurant, Pizza Express, is just next door as well as other restaurants.
WHEN TO GO? Laserzone is open seven days a week. Monday to Friday groups can play from 12pm to 10pm, and on weekends games are played between 10am and 9pm. During school holidays games start at 11am and finish at 10pm.
TELL ME MORE: For sat-nav users the address and postcode is: Laserzone, Castle Buildings, Worcester Place, Swansea, SA1 1JQ. More information about game prices and opening times can be found on the Laserzone website at http://www.laserzone.org/ or by phoning 01792 653433.
Visit Richard Thomas's website at http://www.richardthomassite.com/.
Posted by RichardThomasBlog.com at 18:44

Email ThisBlogThis!Share to TwitterShare to FacebookShare to Pinterest
Labels: Day Out columns, Laserzone