Brewing up some fun

Below is my “Big Day Out” column from the Saturday, June 2, 2012, Swansea edition of the South Wales Evening Post. 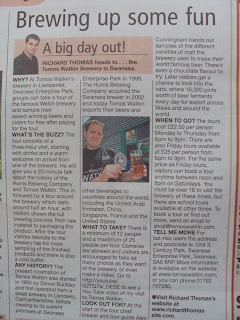 Brewing up some fun
A big day out!
RICHARD THOMAS heads to Tomos Watkin Brewery in Swansea.

WHY? At Tomos Watkin’s brewery in Llansamlet, Swansea Enterprise Park, groups can take a tour of the famous Welsh brewery and sample their award wining beers and ciders for free after paying for the tour.
WHAT'S THE BUZZ? The tour consists of a three hour visit and starts with drinks and a warm welcome on arrival from one of the brewers who will give you a 20 minuet talk about the history of the Hurns Brewing Company and Tomos Watkin. This is followed by a tour around the brewery which lasts around half an hour where visitors are shown the full brewing process from raw material to packaging the product. After the tour visitors relocate back to the brewery tap for more sampling of the finished products and there is also a cold buffet including sausage roles, crisps, chicken legs, cocktail sausages and other snacks available.
ANY HISTORY? The present incarnation of Tomos Watkin was started in 1995 by Simon Buckley and first operated from a small brewery in Llandeilo, Carmarthenshire before moving to their current premises in Swansea Enterprise Park in 1999. The Hurns Brewing Company acquired the Swansea brewer in 2002 and today Tomas Watkin exports their beers and other beverages to countries around the world, including the United Arab Emirates, China, Singapore, France, and the United States.
LOOK OUT FOR? At the start of the tour chief brewer and tour guide Alex Cunningham hands out samples of the different varieties of malt the brewery uses to make their world famous beer. There's even a chocolate flavour to try. Later visitors get a chance to look into the vats where 16,000 pints worth of beer ferments every day for export across Wales and around the world.
WHAT TO TAKE? There is a minimum of 12 people and a maximum of 25 people per tour. Cameras are allowed on the tour and visitors are encouraged to take as many photos as they want of the brewery, or even make a video of their tour. Go to http://youtu.be/G2TQ7w_DESE to see a You Tube video of my visit to Tomos Watkin.
WHEN TO GO? The tours cost £22.50 per person Monday to Thursday from 6pm to 9pm, there are also Friday tours available at £25 per person from 6pm to 9pm. For the same price as Friday tours, visitors can book a tour anytime between 12pm and 8pm on Saturdays. You must be over 18 to visit the brewery at these times, but there are school tours available at other times. To book a tour or find out more, send an email to shop@tomoswatkin.com.
TELL ME MORE: For sat-nav users the address and postcode is: Unit 3, Century Park, Swansea Enterprise Park, Swansea, SA6 8RP. More information is available on the website at www.tomoswatkin.com, or, you can phone 01792 797280.
Visit Richard Thomas's website at www.richardthomassite.com.
Posted by RichardThomasBlog.com at 15:32