Below is my “Big Day Out” column from the Saturday, May 5, 2012, Swansea edition of the South Wales Evening Post. 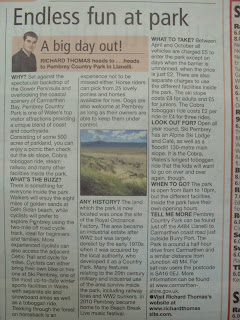 Endless fun at Park
A big day out!
This week RICHARD THOMAS heads to Pembrey Country Park in Llanelli.

WHY? Set against the spectacular backdrop of the Gower Peninsula and overlooking the coastal scenery of Carmarthen Bay, Pembrey Country Park is one of Wales’ top visitor attractions providing a unique blend of coast and countryside. Consisting of some 500 acres of parkland, you can enjoy a picnic then check out the ski slope, Cobra toboggan ride, steam railway and many other facilities inside the park.
WHAT’S THE BUZZ? There is something for everyone inside the park. Walkers will enjoy the eight miles of golden sands at Cefn Sidan beach, while cyclists will prefer to explore Pembrey using the two-mile off road cycle track, ideal for beginners and families. More experienced cyclist can also access the adjacent Celtic Trail and cycle for miles. Cyclists can either bring their own bike or hire one at Ski Pembrey, one of the most up-to-date winter sports facilities in Wales with separate ski and snowboard areas as well as a toboggan ride. Trekking through the forest on horseback is an experience not to be missed either. Horse riders can pick from 25 lovely ponies and horses available for hire. Dogs are also welcome at Pembrey as long as their owners are able to keep them under control.
LOOK OUT FOR? Open all year round, Ski Pembrey has an Alpine Ski Lodge and Café, as well as a floodlit 130 meter main slope. It is the Cobra, Wales’ longest toboggan ride that the kids will want to go on other and other again, though.
ANY HISTORY? The land which the park is now located was once the site of the Royal Ordnance Factory. The area became an industrial estate after WW2 but was largely derelict by the early 1970s when it was acquired by the local authority, who developed it as a Country Park. Many features relating to the 20th century military and industrial use of the area survive inside the park, including railway lines and WW2 bunkers. In 2010 Pembrey became home to the Beach Break Live music festival.
WHAT TO TAKE? Between April and October all vehicles are charged £5 to enter the park except on days when the barrier is unmanned, when the price is just £2. There are also seperate charges to use the different facilities inside the park. To use the ski slope costs £8 for adults and £5 for juniors. The Cubbra toboggan ride costs £2 per ride or £4 for three rides.
WHEN TO GO? The Park is open daily from 8am to 10pm, but the different facilities inside the park have their own opening hours.
TELL ME MORE: Pembrey Country Park can be found just off the A484 Llanelli to Carmarthen coast road just outside Burry Port. The Park is approximately a half hour drive from Carmarthen and a similar distance from Junction 48 M4. For sat-nav users the postcode is SA16 0EJ. More information can be found at www.carmarthenshire.gov.uk. You can also send an email to leisure@carmarthenshire.gov.uk or phone 01554 742424.
Visit Richard Thomas's website at www.richardthomassite.com.
Posted by RichardThomasBlog.com at 20:10