Roll up for derby fun

Below is my “Big Day Out” column from the Saturday, March 24, 2012, Swansea edition of the South Wales Evening Post. 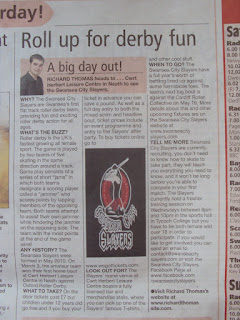 
Roll up for derby fun
A big day out!
RICHARD THOMAS heads to Cwrt Herbert Leisure Centre in Neath to see the Swansea City Slayers.
WHY? The Swansea City Slayers are Swansea's first flat track roller derby team, providing fun and exciting roller derby action for all ages.
WHAT'S THE BUZZ? Roller derby is the UK’s fastest growing all female sport. The game is played by two teams of five skating in the same direction around a track. Game play consists of a series of short “jams” in which both teams designate a scoring player called a “jammer” who scores points by lapping members of the opposing team. Both teams attempt to assist their own jammer while hindering the jammer on the opposing side. The team with the most points at the end of the game wins!
ANY HISTORY? The Swansea Slayers were formed in May 2010. On March 3, the amateur team won their first home bout at Cwrt Herbert Leisure Centre in Neath against Oxford Roller Derby.
LOOK OUT FOR? The Slayers’ home venue at Cwrt Herbert Leisure Centre boasts a fully licensed bar and merchandise stalls, where you can pickup one of the Slayers’ famous t-shirts and other cool stuff.
WHAT TO TAKE? On the door tickets cost £7, but children under 12-years old go free and if you buy your ticket in advance you can save a pound. As well as a full day entry to both the mixed scrim and headline bout, ticket prices include an event programme and entry to the Slayers’ after party. To buy tickets online go to www.wegottickets.com.
WHEN TO GO? The Swansea City Slayers have a full years worth of battling lined up against some formidable foes. The team’s next big bout is against the Cardiff Roller Collective on May 19. More details about this and other upcoming fixtures are on the Swansea City Slayers website at www.swanseacityslayers.com.
TELL ME MORE: Swansea City Slayers are currently recruiting, you don't need to know how to skate to take part, they will teach you everything you need to know, and it won't be long before you're able to compete in your first match. The Slayers currently hold a fresher training session on Wednesdays between 8pm and 10pm in the sports hall in Tycoch College, but you have to be both female and over 18 in order to participate. If you would like to get involved you can send an email to contact@swanseacityslayers.com or visit the Swansea City Slayers Facebook Page at www.facebook.com/swanseacityslayers.
Posted by RichardThomasBlog.com at 14:30