Below is my “Big Day Out” column from the Saturday, March 3, 2012, Swansea edition of the South Wales Evening Post. 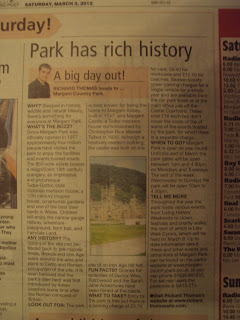 
Park has rich history
A big day out!
RICHARD THOMAS heads to …
Margam Country Park.
WHY? Steeped in history, wildlife and natural beauty, there’s something for everyone at Margam Park on the slopes of Mynydd Margam, two miles from Port Talbot.
WHAT’S THE BUZZ? Since Margam Park was officially opened in 1977 approximately four million people have visited the park to enjoy the facilities and events hosted inside. The 850 acre estate boasts a magnificent 18th century orangery, an impressive and picturesque Tudor-Gothic style Victorian mansion house, a 12th century chapter house, ornamental gardens and one of the best deer herds in Wales. Children will enjoy the narrow gauge railway, adventure playground, farm trail, and Fairytale Land.
ANY HISTORY? The history of the site can be traced back to pre-historic times, Bronze and Iron Age relics abound the area and point to Celtic and Roman occupation at the site. It is even believed that the park’s deer herd was first introduced by the Italian invaders some time after the Roman conquest of Britain in the 1st century CE.
LOOK OUT FOR? The park is best known for being the home to Margam Abbey built in 1147 and Margam Castle, a Tudor mansion house commissioned by Christopher Rice Mansel Talbot in 1830. Although a relatively modern building, the castle was built on the site of an Iron Age hill fort, and during the ten years it took to complete the castle there were several deaths of masons involved in the contraction work. The Gothic building’s troubled beginning combined with the 4000 year history of the site has attracted many paranormal investigators to the castle, including visits by the TV series Most Haunted in 2006.
FUN FACTS? Margam Castle doesn’t only attract TV shows about ghosts and the supernatural, scenes for episodes of Doctor Who, Torchwood and the Sarah Jane Adventures have also been filmed at the castle.
WHAT TO TAKE? Entry to the park is free but there is a parking charge of £3.70 for cars, £6.40 for minibuses and £12.70 for coaches. Season tickets cover parking charges for a single vehicle for a whole year and are available from the car park kiosk or at the main office just off the Castle Courtyard. These cost £16 each but don’t cover the costs of some of the events hosted by the park, for which there is a separate charge.
WHEN TO GO? Margam Park is open all year round. Until the end of March the park gates will be open between 1pm and 4.30pm on Mondays and Tuesdays. The rest of the week (Wednesday to Sunday) the park will be open 10am to 4.30pm.
TELL ME MORE: Throughout the year the park hosts various events from Living History Weekends to clown festivals and charity walks the next of which is “Lets Walk Cymru” and will be held on March 9. Up to date information about these and other events and attractions at Margam Park can be found on the park’s website at www.margamcountrypark.co.uk, or you can phone 01639 881635. For sat-nav users the postcode is SA13 2TJ.
Posted by RichardThomasBlog.com at 19:30