Below is my “Big Day Out” column from the Saturday, February 25, 2012, Swansea edition of the South Wales Evening Post. 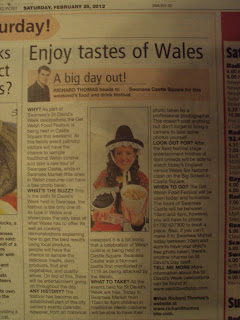 
Enjoy tastes of Wales
A big day out!
RICHARD THOMAS heads to ….
Swansea Castle Square.
WHY? As part of Swansea’s St David’s Week celebrations a Get Welsh Food Festival is being held in Castle Square this weekend. At this family event patriotic locals and visitors will have the chance to sample traditional Welsh cuisine and take a rare tour of Swansea Caste, while in Swansea Market little ones in Welsh costume can have a free 7" x 5" photo taken!
WHAT’S THE BUZZ? This is the sixth St David's Week held in Swansea, the week long festival is the only one of its type in Wales and showcases the very best of what Wales has to offer. As well as cooking demonstrations on how to get the best results using local produce, people will have the chance to sample the delicious meats, dairy products, fruit and vegetables, and quality wines. On top of this, there will be entertainment going on throughout the day.
ANY HISTORY? The festival has become an established part of the city centre’s events calendar, however, from an historical viewpoint it is a bit ironic that a celebration of Welsh cuisine is being held in Castle Square. Swansea Castle was a Norman castle first mentioned in 1116 as being attacked by the Welsh!
LOOK OUT FOR? After the food festival stage entertainment finishes at 4pm crowds will be able to watch England vs. Wales in the Six Nations on the Big Screen in Castle Square.
WHAT TO TAKE? All the events held for St David’s Week are free. Today in Swansea Market from 10am to 4pm children in traditional Welsh costume will be able to have their photo taken by a professional photographer. This doesn’t cost anything, but don’t forget to bring a camera to take some photos yourself.
WHEN TO GO? The Get Welsh Food Festival will be open today and tomorrow from 9am to 5pm. The tours of Swansea Castle will be between 10am and 4pm, however, you will have to phone 01792 637300 to book a place. Also, if you can’t make it to Swansea Market today between 10am and 4pm to have your child’s photo taken in Welsh dress don’t panic, there’s another chance to get a free photo on March 1.
TELL ME MORE: More information about the St David’s Week celebrations can be found at www.saintdavidsday.com.
Posted by RichardThomasBlog.com at 19:29