Below is my “Big Day Out” column from the Saturday, March 17, 2012, Swansea edition of the South Wales Evening Post. 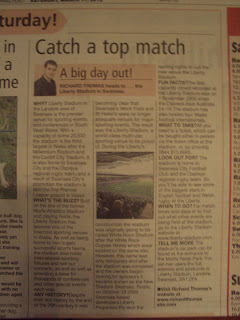 
Catch a top match
A big day out!
RICHARD THOMAS heads to …
Liberty Stadium in Swansea.
WHY? Liberty Stadium in the Landore area of Swansea is the premier venue for sporting events and conferences in South West Wales. With a capacity of some 20,532 the stadium is the third largest in Wales after the Millennium Stadium and the Cardiff City Stadium. It is also home to Swansea City and the Ospreys regional rugby team, and a result of Swansea City's promotion the stadium is also the first Premier League ground in Wales.
WHAT’S THE BUZZ? Built on the site of the former Morfa Athletics Stadium and playing fields, the Liberty Stadium has become one of the foremost sporting venues in Wales. As well as being home to two hugely successful sports teams, the stadium also holds international sporting fixtures and sell out concerts, as well as well as providing a base for thousands of conferences and other special events each year.
ANY HISTORY? Despite their rich history by the end of the 20th century it was becoming clear that Swansea’s Vetch Field and St Helen’s were no longer adequate venues for major sporting events. The result was the Liberty Stadium, a world-class multi-use sporting venue to be proud of. During the Liberty’s construction the stadium was originally going to be called White Rock Stadium after the White Rock Copper Works which once existed on the same site. However, this name was only temporary and after the stadium was competed and the owners began looking for sponsors it became known as the New Stadium Swansea. Finally, on 18 October 2005 Swansea-based developers Liberty Properties Plc won the naming rights to call the new venue the Liberty Stadium.
FUN FACTS? The first capacity crowd recorded at the Liberty Stadium was on 1 November 2006 when the Ospreys beat Australia 24–16.The stadium has also hosted four Wales Football internationals.
LOOK OUT FOR? The stadium is home to Swansea City Football Club and the Ospreys regional rugby team. So you’ll be able to see some of the biggest stars in English football and Welsh rugby at the Liberty.
WHAT TO TAKE? All you need is a ticket, which can be bought either in person via the ticket office at the stadium, or, by phoning 0844 815 6665.
WHEN TO GO? For match times and days or to find out what other events are being held at the stadium, go to the Liberty Stadium website at www.liberty-stadium.com.
TELL ME MORE: The stadium’s car park can be found at the entrance to the Morfa Retail Park. For sat-nav users the full address and postcode is: Liberty Stadium, Landore, Swansea, SA1 2FA.
Posted by RichardThomasBlog.com at 06:57