Below is my “Big Day Out” column from the Saturday, February 4, 2012, Swansea edition of the South Wales Evening Post. 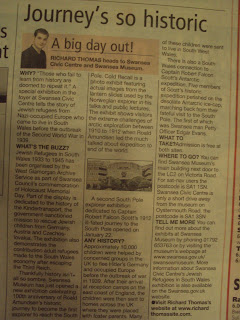 Journey's so historic
A big day out!
RICHARD THOMAS heads to …
Swansea Civic Centre and Swansea Museum.
WHY? “Those who fail to learn from history are doomed to repeat it.” A special exhibition in the foyer at Swansea Civic Centre tells the story of Jewish refugees from Nazi-occupied Europe who came to live in South Wales before the outbreak of the Second World War in 1939.
WHAT’S THE BUZZ? Jewish Refugees in South Wales 1933 to 1945 has been organised by the West Glamorgan Archive Service as part of Swansea Council's commemoration of Holocaust Memorial Day. Part of the display is dedicated to the history of the Kindertransport, the government-sanctioned mission to rescue Jewish children from Germany, Austria and Czechoslovakia. The exhibition also demonstrates the contribution adult refugees made to the South Wales economy after escaping the Third Reich.
Thankfully history isn’t all so sombre. Swansea Museum has just opened a new exhibition celebrating 100th anniversary of Roald Amundsen's historic journey to become the first explorer to reach the South Pole. Cold Recall is a photo exhibit featuring actual images from the lantern slides used by the Norwegian explorer in his talks and public lectures. The exhibit shows visitors the extreme challenges of arctic exploration between 1910 to 1912 when Roald Amundsen led the much talked about expedition to end of the world.
A second South Pole explorer exhibition dedicated to Captain Robert Falcon Scott's 1912 ill-fated journey to the South Pole opened on January 22.
ANY HISTORY? Approximately 10,000 children were helped by concerned groups in the UK to flee Hitler’s Germany and occupied Europe before the outbreak of war in 1939. After their arrival at reception camps on the east coast of England, the children were then sent to homes across the UK where they were placed with foster parents. Many of these children were sent to live in South Wales.
There is also a South Wales connection to Captain Robert Falcon Scott's Antarctic expedition. Five members of Scott's historic expedition perished on the desolate Antarctic ice-cap, marching back from their fateful visit to the South Pole. The first of which was Swansea man Petty Officer Edgar Evans.
WHAT TO TAKE? Admission is free at both Swansea Museum and the exhibition at Swansea Civic Centre.
LOOK OUT FOR? After you’ve checked out the Cold Recall exhibition there is much more to see at Swansea Museum. The museum’s six galleries contain all kinds of unusual objects from Swansea’s past and the rest of the world, including a collection of Victorian antiques and even an Egyptian mummy.
WHEN TO GO? Swansea Museum is open from 10am to 5pm every Tuesday to Sunday. Last admissions are at 4pm. The museum is closed Mondays and bank holidays. The museum’s Antarctic explorer exhibitions will be open until April 22.
The Jewish Refugees in South Wales exhibition is open all day at Swansea Civic Centre until February 5. So tomorrow is your last chance to visit this exhibition at the Civic Centre before it closes.
WHERE TO GO? You can find Swansea Museum’s main building next door to the LC2 on Victoria Road. For sat-nav users the postcode is SA1 1SN. Swansea Civic Centre is only a short drive away from the museum on Oystermouth Road, the postcode is SA1 3SN.
TELL ME MORE: You can find out more about the exhibits at Swansea Museum by phoning 01792 653763 or by visiting the museum’s webpage at www.swansea.gov.uk/swanseamuseum. More information about Swansea Civic Centre’s Jewish Refugees in South Wales exhibition is also available on the Swansea.gov.uk website.
Posted by RichardThomasBlog.com at 17:30