Below is my “Big Day Out” column from the Saturday, February 11, 2012, Swansea edition of the South Wales Evening Post. 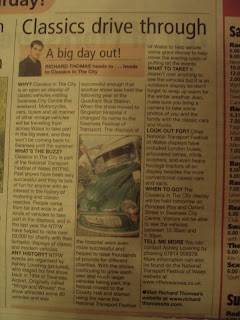 Classic drive through
A big day out!
RICHARD THOMAS heads to Classics In The City.

WHY? Classics In The City is an open air display of classic vehicles visiting Swansea City Centre this weekend. Motorcycles, cars, buses and all manner of other vintage vehicles will be travelling from across Wales to take part in the big event, and they won’t be coming back to Swansea until the summer.
WHAT’S THE BUZZ? Classics In The City is part of the National Transport Festival of Wales. Past shows have been very successful and they’re lots of fun for anyone with an interest in the history of motoring and classic vesicles. People come from far and wide in all kinds of vehicles to take part in the displays, and in the last year the NTFW have helped to raise over £8,000 for charity with their fantastic displays of classic and modern vehicles.
ANY HISTORY? NTFW events are organised by Ashley Lovering, who did his first show back in 1994 at Swansea Airport. Originally called “Wings and Wheels” the show attracted some 80 vehicles and was successful enough that another show was held the following year at the Quadrant Bus Station. When the show moved to Singleton Hospital it changed its name to the Swansea Festival of Transport. The displays at the hospital were even more successful and helped to raise thousands of pounds for different charities. With the shows continuing to grow each year and much larger vehicles taking part, the festival moved to the County Hall and started using the name the National Transport Festival of Wales to help secure some grant money to help cover the soaring costs of putting on the events.
LOOK OUT FOR? Other National Transport Festival of Wales displays have included London buses, articulated lorries, minis, scooters, and even heavy haulage tractors all on display besides the more conventional classic cars and vans.
WHAT TO TAKE? It doesn’t cost anything to see the vehicles but it is an outdoors display so don’t forget to wrap up warm for the winter weather. Also, make sure you bring a camera to take some photos of you and the family with the classic cars and trucks.
WHEN TO GO? The Classics In The City display will be held tomorrow (Sunday February 12) on Princess Way and Oxford Street in Swansea City Centre. Visitors will be able to see the vehicles between 10.30am and 4.30pm.
TELL ME MORE: You can contact Ashley Lovering by phoning 07814 958379. More information can also be found on the National Transport Festival of Wales website at www.ntfwswansea.co.uk.
Posted by RichardThomasBlog.com at 04:32