Below is my “Big Day Out” column from the Saturday, November 26, 2011, Swansea edition of the South Wales Evening Post. 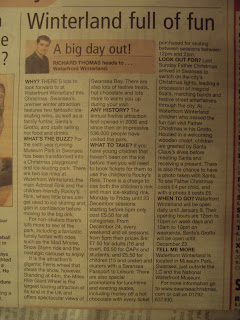 Winterland full of fun
A big day out!
RICHARD THOMAS heads to …
Waterfront Winterland in Swansea.
WHY? There’s lots to look forward to at Waterfront Winterland this Christmas. Swansea’s premier winter attraction features two fantastic ice-skating rinks, as well as a family funfair, Santa’s Grotto, and stalls selling delicious hot food and drinks.
WHAT’S THE BUZZ? For the sixth year running Museum Park in Swansea has been transformed into a Christmas playground and ice-skating park. There are two excellent ice rinks at Waterfront Winterland, the main Admiral Rink and the children friendly Rocky’s Rink, where little ones can get used to ice skating and gain in confidence before moving to the big rink.
For non-skaters there’s lots more to see at the park, including their fantastic family funfair with rides like the Mad Mouse, Snow Storm ride and the nostalgic carousel to enjoy. It is the attraction’s gigantic Ferris wheel that steals the show, however. Standing at 44m, the Miles Hire Giant Wheel is largest touring attraction of its kind in the UK and offers spectacular views of the Swansea Bay area. There are also lots of festive treats, hot chocolate and lots more to warm you up during your visit, which you can enjoy in the undercover spectator area.
ANY HISTORY? The annual festive attraction first opened in 2006 and since then an impressive 536,000 people have visited the park.
WHAT TO TAKE? If you have young children that haven’t been on the ice before then you will need to book tickets for them to use the children’s Rocky's Rink. There is a charge to use both the children’s rink and main ice-skating rink. Monday to Friday until 23 December sessions starting before 5pm only cost £5.50 for all categories. From 24 December, every weekend and all sessions from 5pm their prices are: £7.50 for adults (16 and over), £6.50 for OAPs and students, and £5.50 for children (15 and under) and skaters with a Swansea Passport to Leisure. There are also special promotions for lunchtime and evening skates, including money off a hot chocolate with every ticket purchased for skating sessions between 12pm and 2pm.
LOOK OUT FOR? Last Sunday Father Christmas himself arrived in Swansea to switch on the city’s Christmas lights. The jolly big man led a procession of magical floats, marching bands and festive street entertainers through the city. The annual Christmas Parade made its way from the Dylan Thomas Centre down the Kingsway with hundreds of excited youngsters cheering what they saw. At Waterfront Winterland Children who missed the fun can visit Father Christmas in his Grotto.
Housed in a welcoming wooden chalet, children are greeted by Santa Claus’ elves before meeting Santa and receiving a Christmas present. There is also the chance to have a photo taken with Santa. To see Father Christmas costs £4 per child, and with a photograph it costs £5.
WHEN TO GO? Waterfront Winterland will be open daily until 8 January 2012. Their opening hours are 12pm to 10pm on week days and 10am to 10pm on weekends. Santa’s Grotto is open until 23 December.
TELL ME MORE: Waterfront Winterland is located in Museum Park, Swansea, just outside the LC and the National Waterfront Museum. For more information go to http://www.swanseachristmas.com/ or call on 01792 637300.
Posted by RichardThomasBlog.com at 21:18