Below is my “Big Day Out” column from the Saturday, November 12, 2011, Swansea edition of the South Wales Evening Post. 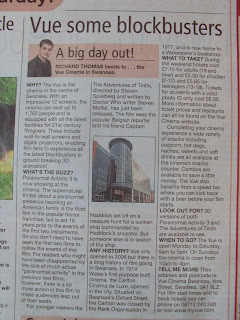 Vue some blockbusters
A big day out!
RICHARD THOMAS heads to ...
the Vue Cinema in Swansea.
WHY? The Vue is a new state-of-the-art cinema in the centre of Swansea. With an impressive 12 screens, the cinema can seat up to 1,762 people and is equipped with all the latest facilities for 21st century filmgoers. These include wall-to-wall screens and digital projectors, enabling film fans to experience all the latest blockbusters in ground breaking 3D animation!
WHAT’S THE BUZZ? Paranormal Activity 3 is now showing at the cinema. The supernatural thriller about a paranormal presence haunting an American family is the third film in the popular horror franchise, but is set 18 years prior to the events of the first two instalments. So you don’t need to have seen the first two films to follow the events of this film. For readers who might have been disappointed by the lack of much actual “paranormal activity” in the previous two films, however, there is a lot more action in this film to make audiences leap out of their seats.
For younger viewers the The Adventures of Tintin, directed by Steven Spielberg and written by Doctor Who writer Steven Moffat, has just been released. The film sees the popular Belgian reporter and his friend Captain Haddock set off on a treasure hunt for a sunken ship commanded by Haddock's ancestor. But someone else is in search of the ship.
ANY HISTORY? The Vue only opened in 2006 but there is a long history of film going in Swansea. In 1914 Wales' first purpose built cinema, the Carlton Cinema de Luxe, opened in the city.
Situated on Swansea’s Oxford Street, the Carlton was closed by the Rank Organisation in 1977, and is now home to a Waterstones bookshop.
WHAT TO TAKE? During the weekend tickets cost £7.15 for adults (19 and over) and £5.30 for children (2-12) and £5.65 for teenagers (13-18). Tickets for students with a valid photo ID only cost £6.05. More information about ticket prices and discounts can all be found on the Vue Cinema website.
Completing your cinema experience a wide variety of snacks including popcorn, hot dogs, nachos, sweets and soft drinks are all available at the cinema’s snacks counter. Combos are available to save a little money. The Vue also benefits from a speed bar where you can kick back with a beer before your film starts.
LOOK OUT FOR? 3D versions of both Paranormal Activity 3 and The Adventures of Tintin are available to see at the Vue.
WHEN TO GO? The Vue is open Monday to Saturday, 9am to 5pm. On Sundays the cinema is open from 10am to 4pm.
TELL ME MORE: For sat nav users their address and postcode is: Vue Cinema Swansea, York Street, Swansea, SA1 3LZ. For film start times and to book tickets you can phone on 08712 240 240 or visit the Vue Cinema website at http://www.myvue.com/.
Posted by RichardThomasBlog.com at 21:05