Game on at centre

Below is my “Big Day Out” column from the Saturday, January 21, 2012, Swansea edition of the South Wales Evening Post. 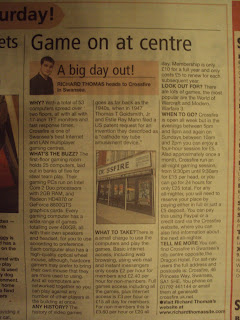 ﻿----------------------------------------------------
Game on at centre
A big day out!
RICHARD THOMAS heads to Crossfire in Swansea.
WHY? With a total of 53 computers spread over two floors, all with all with 17-inch TFT monitors and fast response times, Crossfire is Swansea's best Internet and LAN multiplayer gaming centre.
WHAT’S THE BUZZ? The first-floor gaming room holds 25 computers, laid out in banks of five for ideal team play. Their gaming PCs run on Intel Core 2 Duo processors with 2GB RAM, and Radeon HD4870 or GeForce 8800GTS graphics cards. Every gaming computer has a wide range of games totalling over 400GB, all with their own speakers and headset, for you to use according to preference. Each computer also has a high-quality optical wheel mouse, although, hardcore gamers may prefer to bring their own mouse that they are more used to using. And all computers are networked together so you can play against any number of other players in the building at once.
ANY HISTORY? The history of video games goes as far back as the 1940s, when in 1947 Thomas T. Goldsmith, Jr. and Estle Ray Mann filed a US patent request for an invention they described as a "cathode ray tube amusement device."
WHAT TO TAKE? There is a small charge to use the computers and play the games. Basic internet access, including web browsing, using web mail and instant messengers only costs £2 per hour for members and £2.40 per hour for non-members. Full games access including all the games, plus internet access is £3 per hour or £15 all day for members. For non-members this is £3.60 per hour or £20 all day. Membership is only £10 for a full year and only costs £5 to renew for each subsequent year.
LOOK OUT FOR? There are lots of games, the most popular are the World of Warcraft and Modern Warfare 3.
WHEN TO GO? Crossfire is open all week but in the evenings between 5pm and 9pm and again on Sundays between 10am and 2pm you can enjoy a four-hour session for only £5! Also approximately once a month, Crossfire run an all-night gaming session, from 9:30pm until 9:30am for £15 per head, or you can go for 24 hours for only £25 total. For any all-nighter, you will need to reserve your place by paying either in full or just a £5 deposit. You can pay this using Paypal or a credit card via the Crossfire website, where you can also find information about the next all-nighter.
TELL ME MORE: You can find Crossfire in Swansea’s city centre opposite the Dragon Hotel. For sat users the full address and postcode is: Crossfire, 46 Princess Way, Swansea, SA1 5HE. You phone on 01792 461144 or email them at general@crossfire.uk.net. More information can be found on the Crossfire website at http://www.crossfire.uk.net/.

Email ThisBlogThis!Share to TwitterShare to FacebookShare to Pinterest
Labels: Crossfire, Day Out columns