Bingo! A top day out

Below is my “Big Day Out” column from the Saturday, January 14, 2012, Swansea edition of the South Wales Evening Post. 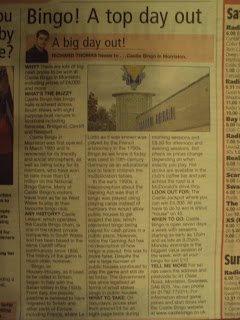 Bingo! A top day out
A big dat out!
RICHARD THOMAS heads to …
Castle Bingo in Morriston.
WHY? There are lots of big cash prizes to be won at Castle Bingo in Morriston including prizes of £4,000 and more!
WHAT’S THE BUZZ? Castle Bingo has bingo halls scattered across South Wales with eight purpose built bingo halls in locations including Swansea, Bridgend, Cardiff and Newport.
Castle Bingo in Morriston was first opened in March 1993 and is renowned for its friendly and social atmosphere, as well as being lucky for its members, who have won to date over £4 million on the National Bingo Game. Many of Castle Bingo’s visitors travel from as far as West Wales to play at their favourite bingo club.
ANY HISTORY? Castle Leisure which operates the Castle Bingo chain is one of the oldest private companies in South Wales and has been based in the same Cardiff office continuously since 1856. The history of the game is much older, however.
Bingo or Housey-Housey, as it used to be called in Britain, began in Italy with the Italian lottery in the 1500s. From Italy, the popular pastime is believed to have migrated to Britain and other parts of Europe including France, where Le Lotto as it was known was played by the French aristocracy in the 1700s. Bingo as we know it today was used in 19th century Germany as an educational tool to teach children the multiplication tables.
In the early 1990s a misconception about the Gaming Act was that if bingo was played using playing cards instead of numbers this would allow public houses to get around the law, which prevented bingo being played for cash prizes in a public place, however, since the Gaming Act has no description of how bingo is played this was to prove false. Despite the law a large number of public houses continued to play the game and still do so today. The government has since legalised all forms of small stakes bingo in public houses.
WHAT TO TAKE? On Saturdays prices start from as little as £4 for an eight page book during morning sessions and £8.50 for afternoon and evening sessions but these prices are different on other days. Hot drinks are available in the club’s coffee bar and just across the road is a McDonalds drive through.
LOOK OUT FOR? The Castle Jackpot where you can win £4,000. All you have to do to win is shout “house” on 45.
WHEN TO GO? Castle Bingo is open seven days a week with sessions starting as early as 12pm and as late as 9.35pm. Monday evenings is the biggest value session of the week, however, with all your bingo for just £10, and with five big £500 second half houses.
TELL ME MORE: For sat nav users the address and postcode is: 41 Clase Road,
Morriston, Swansea, SA6 8DS. You can phone on 01792 772211.
For more information about game prices and start times visit the Castle Bingo website at http://www.castlebingo.co.uk/.