Below is my “Big Day Out” column from the Saturday, June 4, 2011, Swansea edition of the South Wales Evening Post. 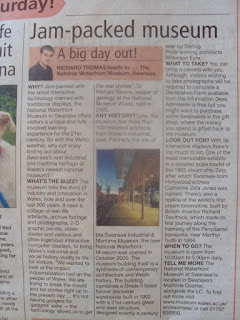 Jam-packed museum
A big day out!
RICHARD THOMAS heads to ...
The National Waterfront Museum in Swansea.
WHY?
Jam-packed with the latest interactive technology married with traditional displays, the National Waterfront Museum in Swansea offers visitors a unique and fully involved learning experience for the 21st century. So with the Welsh weather why not enjoy finding out about Swansea’s vast industrial and maritime heritage at Wales’ newest national museum?
WHAT’S THE BUZZ?
The National Waterfront Museum at Swansea tells the story of industry and innovation in Wales, now and over the last 300 years. The museum uses a collage of real life artefacts, archive footage and photographs, 2-D graphic panels, video diaries and various and often ingenious interactive computer displays, to bring Wales’ industrial and social history vividly to life for visitors. "We wanted to look at the impact industrialisation had on the people of Wales. We are trying to break the mould and tell stories right up to the present day … It's not having gadgets for gadgets' sake - the technology allows us to get the real stories", Dr Richard Bevins, Keeper of Geology at the National Museum Wales, said in 2005.
ANY HISTORY?
Lots, the museum has more than 100 historical artefacts from Wales’ industrial past. Formerly the site of the Swansea Industrial & Maritime Museum the new National Waterfront Museum was opened in October 2005. The museum building itself is a synthesis of contemporary architecture and Welsh history. The building eloquently combining a Grade II listed former dockside warehouse built in 1902 with a 21st century glass and slate structure, designed exactly a century later by Stirling Prize-winning architects Wilkinson Eyre.
WHAT TO TAKE?
You can bring a camera with you. Although, visitors wishing to take photographs will be required to complete a Declaration Form available from the Information Desk. Admission is free but you might want to purchase some keepsakes in the museum’s gift shop, where the money you spend is gifted back to the museum.
LOOK OUT FOR?
With 36 interactive displays there’s too much to list. One of the most memorable exhibits is a detailed scale model of the 1865 steam ship Zeta, after which Swansea-born Hollywood actress Catherine Zeta Jones was named. There’s also a replica of the world's first steam locomotive, built by British inventor Richard Trevithick, which made its first journey along the tramway of the Penydarren Ironworks, near Merthyr Tydfil in 1804.
WHEN TO GO?
The museum is open from 10.00am to 5.00pm daily.
TELL ME MORE
The National Waterfront Museum at Swansea is located in Swansea's Maritime Quarter, and less than half a mile from the city centre. There address is: National Waterfront Museum, Oystermouth Road, Maritime Quarter, Swansea, SA1 3RD. To find out more about exhibits etc. you can visit the National Waterfront Museum website at www.museumwales.ac.uk/en/swansea or call on 01792 638950.
Posted by RichardThomasBlog.com at 17:09 No comments: