A grand place to visit

Below is my “Big Day Out” column from the Saturday, October 15, 2011, Swansea edition of the South Wales Evening Post. 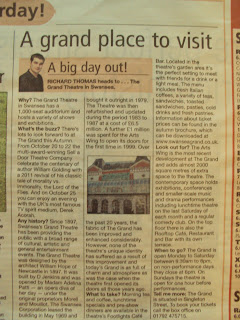 A grand place to visit
A big day out!
RICHARD THOMAS heads to …
The Grand Theatre in Swansea.
WHY?
The Grand Theatre in Swansea has a 1,000-seat auditorium and hosts a wide variety of shows and exhibitions for everyone to enjoy.
WHAT’S THE BUZZ?
There’s lots to look forward to at The Grand this Autumn. From October 20 to 22 the Multi award winning Sell a Door Theatre Company celebrate the centenary of author William Golding with a 2011 revival of his classic tale of morality vs. immorality, the Lord of the Flies. And on October 25 you can enjoy an evening with the UK’s most famous TV Spirit Medium Derek Acorah.
ANY HISTORY?
Since 1897, Swansea's Grand Theatre has been providing the public with a broad range of cultural, artistic and general entertainment events. The Grand Theatre was designed by the architect William Hope of Newcastle in 1897. It was built by D. Jenkins and was opened by Madam Adelina Patti - an Opera Diva of her day - under the original proprietors Morell and Mouillot.
The Swansea Corporation leased the building in May 1969 and bought it outright in 1979. The Theatre was then refurbished and updated during the period 1983 - 1987 at a cost of £6.5 million. A further £1 million was spent for the Arts Wing to open its doors for the first time in 1999.
Over the last twenty years, the fabric of "The Grand" has been improved and enhanced considerably, thanks to the support of the former Swansea Corporation, Swansea City Council and more recently the City and County of Swansea. However, none of the theatre's unique identity has suffered as a result of this improvement and today's Grand is as full of charm and atmosphere as was the case when the theatre first opened its doors all those years ago.
WHAT TO TAKE?
Morning tea and coffee, lunchtime specials and pre-show dinners are available in the theatre’s Footlights Café Bar. Located in the theatre’s delightful garden area it's the perfect setting to meet with friends for a drink or a light meal. The menu includes fresh Italian coffees, a variety of teas, sandwiches, toasted sandwiches, pasties, cold drinks and fresh pastries.
Information about ticket prices can be found in the Autumn Brochure, which can be downloaded at www.swanseagrand.co.uk.
LOOK OUT FOR?
The Arts Wing is the most recent development at The Grand and adds almost 2000 square metres of extra space to the theatre. The contemporary space holds exhibitions, conferences and smaller-scale music and drama performances including lunchtime theatre on the last Saturday of each month and a regular comedy club featuring acts on the comedy circuit. On the top floor there is also the Rooftop Café, Restaurant and Bar with it's own terrace, affording unique views of Swansea.
WHEN TO GO?
The Grand is open Monday to Saturday between 9.30am to 8pm, on non performance days they close at 6pm. On Sundays the theatre is open for one hour before performances.
TELL ME MORE
The Grand is situated in the heart of Swansea’s city centre on Singleton Street. For sat nav users their postcode is SA1 3QJ. To book your tickets call the Box Office on 01792 475715.
Posted by RichardThomasBlog.com at 21:36

Email ThisBlogThis!Share to TwitterShare to FacebookShare to Pinterest
Labels: Day Out columns, The Grand Theatre, tourism