Lots to amuse at pier

Below is my “Big Day Out” column from the Saturday, October 1, 2011, Swansea edition of the South Wales Evening Post. 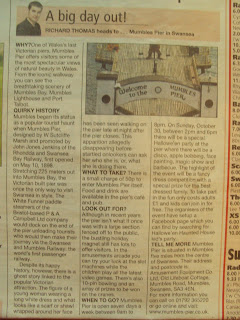 Lots to amuse at pier
A big day out!
RICHARD THOMAS heads to …
Mumbles Pier in Swansea.
WHY?
One of Wales’ last Victorian piers, Mumbles Pier offers visitors some of the most spectacular views of natural beauty in Wales. From the iconic walkway you can see the breathtaking scenery of Mumbles Bay, Mumbles Lighthouse and Port Talbot.
QUIRKY HISTORY?
Mumbles began its status as a popular tourist haunt when Mumbles Pier, designed by W. Sutcliffe Marsh and promoted by John Jones Jenkins of the Rhondda and Swansea Bay Railway, first opened on May 10, 1898. Stretching 225 meters out into Mumbles Bay, the Victorian built pier was once the only way to visit Swansea in style. The White Funnel paddle steamers of the Bristol-based P & A Campbell Ltd company would dock on the end of the pier unloading tourists who would then make their journey via the Swansea and Mumbles Railway: the world’s first passenger railway.
Despite its happy history, however, there is a ghost story linked to the popular Victorian attraction. The figure of a young woman wearing a long white dress and what looks like a scarf or shawl wrapped around her face has been seen walking on the pier late at night after the pier closes. This apparition allegedly disappearing before startled onlookers can ask her who she is, or, what she is doing there.
WHAT TO TAKE?
There is a small charge of 50p to enter Mumbles Pier itself. Food and drink are available in the pier’s café and pub.
LOOK OUT FOR?
Although in recent years the pier has fallen into a state of disrepair with a large section fenced off to the public, the bustling holiday magnet still has lots to offer visitors. In the amusements arcade you can try your luck at the slot machines while the children play all the latest video games. There’s also ten pen bowling and an array of prizes to be won on the cranes.
WHEN TO GO?
Mumbles Pier is open seven days a week between 9am to 8pm. On Sunday October 30 between 2pm and 6pm there will be a special Halloween party at the pier where they’ll be a disco, apple bobbing, face painting, magic show and BBQ. The highlight of the event will be a fancy dress competition with a special prize for the best dressed family. To take part in the fun only costs adults £1 and kids can join in for free. The organisers of the event have setup a Facebook page which you can find by searching for Halloween Haunted House kid`s party!!!
TELL ME MORE
Mumbles Pier is situated in Mumbles five miles from the centre of Swansea. Their address and postcode is: Amusement Equipment Co Ltd, Old Lifeboat Cottage, Mumbles Road, Mumbles, Swansea, SA3 4EN. For more information you can call on 01792 365220 or go to www.mumbles-pier.co.uk.
Posted by RichardThomasBlog.com at 01:33