Below is my “Big Day Out” column from the Saturday, August 6, 2011, Swansea edition of the South Wales Evening Post. 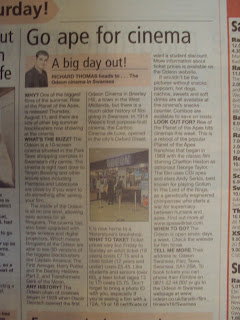 -------------------------------------
Go ape for cinema
A big day out!
RICHARD THOMAS heads to …
The Odeon cinema in Swansea.
WHY?
One of the biggest films of the summer, Rise of the Planet of the Apes, is released Thursday, August 11, and there are lots of other big summer blockbusters now showing at the cinema.
WHAT’S THE BUZZ?
The Odeon is a 10 screen cinema situated in the Park Tawe shopping complex in Swansea’s city centre. The cinema is right next door to Tenpin Bowling and other leisure sites including Plantasia and Lazerzone are close by if you want to do something after seeing your film.
The inside of the Odeon is all on one level, allowing easy access for all filmgoers. The cinema has also been upgraded with large screens and digital projectors. Which means filmgoers at the Odeon are able to see 3D versions of the biggest blockbusters like Captain America: The First Avenger, Harry Potter and the Deathly Hallows Part 2, and Transformers: Dark of the Moon.
ANY HISTORY?
The Odeon chain of cinemas began in 1928 when Oscar Deutsch opened the first Odeon Cinema in Brierley Hill, a town in the West Midlands, but there is a much older history of film going in Swansea. In 1914 Wales' first purpose built cinema, the Carlton Cinema de Luxe, opened in the city’s Oxford Street. It is now home to a Waterstone’s bookshop.
WHAT TO TAKE?
Ticket prices vary but Friday to Sunday an adult ticket (18 years) costs £7.75 and a child ticket (12 years and under) costs £5.45. Like students and seniors (over 60), a teen ticket (ages 13 to 17) costs £5.75. Don’t forget to bring a photo ID with you, especially if your seeing a film with a 12A, 15 or 18 certificate or want a student discount. More information about ticket prices is available on the Odeon website.
It wouldn’t be the pictures without snacks: popcorn, hot dogs, nachos, sweets and soft drinks are all available at the cinema’s snacks counter. Combos are available to save on costs.
LOOK OUT FOR?
Rise of the Planet of the Apes hits cinemas Thursday, August 11. This is a reboot of the popular Planet of the Apes franchise that began in 1968 with the classic film starring Charlton Heston as astronaut George Taylor. The film uses CGI apes and stars Andy Serkis, best known for playing Gollum in The Lord of the Rings, as a genetically engineered chimpanzee who starts a war for supremacy between humans and apes. Find out more at www.apeswillrise.com.
WHEN TO GO?
The Odeon is open seven days a week. Check the website for film times.
TELL ME MORE
Their address is: Odeon Swansea, Parc Tawe, Swansea, SA1 2BA. To book tickets you can phone their Filmline on 0871 22 44 007 or go to the Odeon in Swansea webpage at www.odeon.co.uk/fanatic/film_times/s19/Swansea.