Below is my “Big Day Out” column from the Saturday, August 20, 2011, Swansea edition of the South Wales Evening Post. 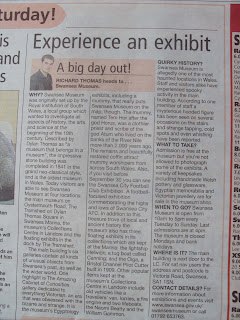 -----------------------------------------﻿
Experience an exhibit
A big day out!
RICHARD THOMAS heads to …
Swansea Museum.
WHY?
Swansea Museum was originally setup by the Royal Institution of South Wales, a local group who wanted to investigate all aspects of history, the arts and science at the beginning of the 19th century. Described by the Swansea poet Dylan Thomas as “a museum that belongs in a museum”, the impressive stone building was completed in 1841 in the grand neo-classical style, and is the oldest museum in Wales.
Today visitors are able to see Swansea Museum at four locations: the main museum on Oystermouth Road, The Tramshed on Dylan Thomas Square in Swansea Marina, the museum’s Collections Centre in Landore and the floating exhibits in the dock by The Tramshed.
The main building’s six galleries contain all kinds of unusual objects from Swansea’s past as well as the wider world. One highlight is The Amazing Cabinet of Curiosities gallery dedicated to everything Victorian, an era that was obsessed with the bizarre and strange. It is the museums Egyptology exhibits including an Ancient Egyptian mummy that really puts Swansea Museum on the map, though.
The mummy, named Tem Hor after the god Horus, was a clothier priest and scribe of the god Atum. He lived on the banks of the River Nile in Upper Egypt between 250-200 BCE. The remains and beautifully restored coffin attract mummy worshipers from across South Wales.
Also, if you visit before September 30 you can see the Swansea City Football Club Exhibition. A football focused exhibition commemorating the highs and lows of Swansea City AFC.
In addition to this treasure trove of local and ancient history the museum also has three floating exhibits in its collections which are kept at the Marina: the lightship Helwick; a tug boat called Canning; and the Olga, a Bristol Channel Pilot Cutter built in 1909. Other popular items kept at the museum’s Collections Centre in Landore include old vehicles like a travellers’ van, lorries, a fire engine and two lifeboats, the Naomi Beatty and the William Gammon.
QUIRKY HISTORY?
Swansea Museum is allegedly one of the most haunted locations in Wales. Staff and visitors alike have experienced spooky activity in the main building. According to one member of staff a mysterious “hooded figure” has been seen on several occasions on the stairs and strange “tapping”, “cold spots” and even “whistling” have also been reported.
WHAT TO TAKE?
Admission is free at the museum but you’re not allowed to photograph some of the exhibits. A wide variety of keepsakes including handmade Welsh pottery and glassware, Egyptian memorabilia and Victorian jewellery are all for sale in the Museum Shop.
WHEN TO GO?
Swansea Museum is open from 10am to 5pm every Tuesday to Sunday. Last admissions are at 4pm. The museum is closed Mondays and bank holidays.
WHERE IS IT?
The main building is next door to the LC2. For sat nav users their address and postcode is: Victoria Road, Swansea, SA1 1SN.
CONTACT DETAILS
For more information about exhibitions and events at Swansea Museum you can visit their website at www.swansea.gov.uk/swanseamuseum. You can also phone on 01792 653763.
Posted by RichardThomasBlog.com at 15:07