Roll up for big thrills

Below is my “Big Day Out” column from the Saturday, June 11, 2011, Swansea edition of the South Wales Evening Post. 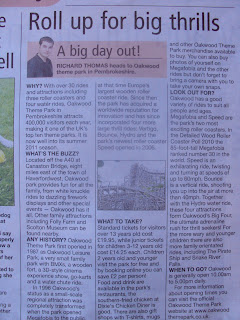 
Roll up for big thrills
A big day out!

RICHARD THOMAS heads to ....
Oakwood Theme Park in Pembrokeshire.
WHY?
With over 30 rides and attractions including three roller coasters and four water rides, Oakwood Theme Park in Pembrokeshire attracts 400,000 visitors each year, making it one of the UK's top ten theme parks. So with Oakwood re-open for the new season in early April, why not check it out?
WHAT’S THE BUZZ?
Located off the A40 motorway at Canaston Bridge, 8 miles east of the town of Haverfordwest, Oakwood park provides fun for all the family, from white knuckle rides to dazzling firework displays and other special events Oakwood has it all. Also other family attractions including Fully Farm and Scolton Museum can be found near Oakwood Theme Park, just six miles away.
ANY HISTORY?
Oakwood Theme Park first opened in 1987 as “Oakwood Leisure Park”, a very small family park with BMXs, a wooden fort, a 3D-style cinema experience show, go-karts and a water chute ride.
In 1996 Oakwood’s status as a small-scale regional attraction was completely transformed when the park opened “Megafobia” to the public. At that time Europe's largest wooden roller coaster ride. Since then the park has acquired a worldwide reputation for innovation and has since incorporated four more large thrill rides: “Vertigo”, “Bounce”, “Hydro” and the park’s newest roller coaster “Speed” opened in 2006.
WHAT TO TAKE?
Standard tickets for visitors over 13 years old cost £19.95, while junior tickets for children 3-12 years old cost £14.25 each. Children two years old and younger visit the park for free and by booking online you can save £2.00 per person!
Food and drink are available in the park’s restaurants, the Southern-fried chicken at Dixie's Chicken Diner is good. There are also gift shops with t-shirts, mugs and other Oakwood Theme Park merchandise available to buy. You can also purchase photos of yourself on Megafobia and the other rides, but don’t forget to bring a camera with you to take your own snaps.
LOOK OUT FOR?
Oakwood has a good variety of rides to suit all people and ages. Megafobia and Speed are the park's two most exciting roller coasters. In the Detailed Wood Roller Coaster Poll 2010 the 85-foot-tall Megafobia ranked number 30 in the world. Speed is an exhilarating ride, twisting and turning at speeds of up to 60 miles per hour. Bounce is a vertical ride, shooting you up into the air at more than 40mph. Together with the Hydro water ride, these four attractions form Oakwood’s “Big Four”, the ultimate adrenaline rush for thrill seekers!
For the more wary and younger children there are also more family orientated rides, including The Pirate Ship and Snake River Falls.
WHEN TO GO?
Oakwood is generally open 10.00am to 5.00pm daily. For more information about opening times you can visit the official Oakwood Theme Park website at www.oakwoodthemepark.co.uk.
Posted by RichardThomasBlog.com at 18:17