Below is my “Big Day Out” column from the Saturday, May 7, 2011, Swansea edition of the South Wales Evening Post. 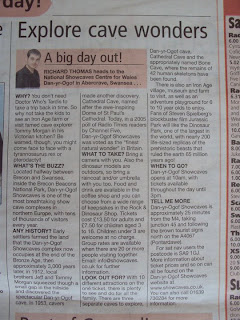 Explore cave wonders
A big day out!
RICHARD THOMAS heads to the National Showcaves Centre for Wales Dan-yr-Ogof in Abercrave, Swansea …
WHY?
You don’t need Doctor Who's Tardis to take a trip back in time. So why not take the kids to see an Iron Age farm or visit famed cave explorer Tommy Morgan in his Victorian kitchen? Be warned, though, you might come face to face with tyrannosaurus rex or pterodactyl!
WHAT’S THE BUZZ?
Located halfway between Brecon and Swansea, inside the Brecon Beacons National Park, Dan-yr-Ogof Showcaves is one of the most breathtaking show cave complexes in northern Europe, with tens of thousands of visitors every year.
ANY HISTORY?
Early settlers farmed the land that the Dan-yr-Ogof Showcaves complex now occupies at the end of the Bronze Age, then approximately 3,000 years later, in 1912, local brothers Jeff and Tommy Morgan squeezed though a small gap in the hillside and discovered the spectacular Dan-yr-Ogof cave. In 1953, cavers made another discovery, Cathedral Cave, named after the awe-inspiring Dome of St Paul’s Cathedral. Today, in a 2005 poll of Radio Times readers by Channel Five, Dan-yr-Ogof Showcaves was voted as the "finest natural wonder” in Britain.
LOOK OUT FOR?
With 10 different attractions on the one ticket there is plenty to see and do for all the family. There are three separate caves to explore, Dan-yr-Ogof cave, Cathedral Cave, and the appropriately named Bone Cave, where the remains of 42 human skeletons have been found. There is also an Iron Age village, museum, and farm to visit, as well as an adventure playground for 6-10 year olds to enjoy. Fans of Steven Spielberg’s blockbuster film Jurassic Park will like the Dinosaur Park, one of the largest in the world, with nearly 200 life-sized replicas of the prehistoric beasts that ruled the earth 65 million years ago!
WHAT TO TAKE?
Bring a camera with you. Also the dinosaur models are outdoors, so bring a raincoat and/or umbrella with you too. Food and drink are available in the Coffee Shop and you can choose from a wide range of keepsakes in Rock & Dinosaur Shop. Tickets cost £13.50 for adults and £7.50 for children ages 3-16, children under three years old are welcome at no charge. Group rates are available when there are 20 or more people visiting together. Email: info@showcaves.co.uk for further information.
WHEN TO GO?
Dan-yr-Ogof Showcaves will be open for the duration of the February half term week. They open at 10.00am, with tickets available throughout the day until 3.00pm.
TELL ME MORE
Dan-yr-Ogof Showcaves is approximately 25 minuets from the M4, taking junction 45 and following the brown tourist signs north on the A4067 (Pontardawe). For sat nav users their postcode is SA9 1GJ. More information about ticket prices etc. can all be found on the Dan-yr-Ogof Showcaves website at www.showcaves.co.uk. You can also call on 01639 730284.
Posted by RichardThomasBlog.com at 17:05